SINGAPORE - When Labyrinth opened in Neil Road four years ago, I was not particularly impressed with chef-owner Han Li Guang's molecular gastronomy take on Singapore dishes, such as a chendol xiao long bao that sounded interesting but could be more refined.

Last year, after he moved the restaurant to the Esplanade, I was there for lunch the day it was conferred a Michelin star for the first time. The cooking was more elegant, but still too gimmicky for my liking.

A dish, for example, was a deconstructed Old Chang Kee curry puff - which seemed unnecessary when I could eat an actual curry puff that tasted similar for a fraction of the price.

Labyrinth has changed again, after closing for a minor renovation. It reopened about two months ago with a new look and direction that focuses on re-interpreting local dishes using ingredients sourced locally or in nearby areas.

Menu cards are placed on the table to introduce each dish and there is even a map showing the location of the various farms.

The change is a bold move because, despite a growing number of farms here, local produce is not always of the best quality. And when you are charging $178 per person - there's no a la carte menu here - quality is a major factor.

But Han is the first to acknowledge that local does not necessarily mean the best, so his mission is to think of the best way to showcase the produce instead. That way, he makes it easier for diners to buy into his ideas.

The new 10-course menu is his most confident yet. While I am not impressed by every dish, the thought that went into creating each of them is laudable.

An example is the Labyrinth Rojak. The idea came out of a stingless bee honey that the chef gets from a farm in Batam. It is not very sweet but has an interesting mild acidity. Mixing it with prawn paste, he creates a taste profile that works well as a rojak dressing.

But this is no ordinary rojak of cucumber and pineapple chunks. Instead, you find a mix of herbs and flowers from Edible Garden City, an urban farming project. These include pea flowers, green wood sorrel, Indian borage and Okinawan spinach, all topped with a scoop of jackfruit and chempedak sorbet.

Stirred together, it is a cornucopia of aromatic flavours. And to think it all started with a honey that would not win any accolades on its own.

Then there is "Ang Moh" Chicken Rice that comes in the shape of a dumpling, accompanied by a roux or flour-thickened sauce made with chicken stock.

The rice used to make the dumpling skin is ground in-house, the filling is made with diced chicken from Toh Thye San farm, and the chilli sauce made from a recipe by the chef's grandmother. It looks nothing like chicken rice, but in the mouth, you taste the iconic Singapore dish.

I like Grandma's Fish Maw Soup too, where the main ingredient is fish cake made solely with yellow tail snapper bought at Jurong Fishery. Sliced thinly and arranged as a rosette in the centre of the dish, it is sprinkled with bits of fish maw that have been deep-fried to resemble lard bits. At the table, a black chicken stock with pieces of braised fish maw is added.

It's a complicated dish that boasts different textures and flavours. I'm not crazy about the fish maw - you can find better versions in Chinese restaurants - but the texture of the slightly springy fishcake is something you get only with handmade versions. And that is what I appreciate.

Among the desserts is Cristal de Chine Caviar, a fancy name for a familiar taste. It's a toasted sandwich with a slab of kaya ice cream in the middle, and topped with caviar in place of salted butter. There is also a sauce of egg yolk cured with soya sauce. 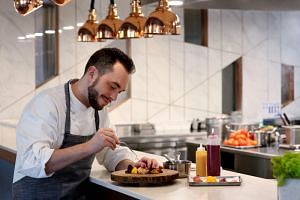 Wong Ah Yoke v Michelin: The Singapore restaurants that should be on the list

It's easy to figure out what this is inspired by: kaya toast with soft-boiled egg, a popular Singapore breakfast that is turned into a cold dessert here. And it tastes just as satisfying.

Other dishes need some tweaking. Nippon Koi Farm Sea Perch is spoilt by an overcooked fish that has been cured with ham and then basted with oil. And the broth it comes in - made with bak kut teh herbs and aged mandarin peel - is too strong for the delicate seafood.

Uncle William's Quail doesn't do anything for me either. The tiny bird, with its legs chargrilled and the breast slow-roasted, does not boast an assertive marinade, and is overwhelmed by the satay sauce served with it.

The revamped dining room is dimly lit, with strategic lighting that focuses on the table to ensure food photos are brightly lit. The ambience is soothing, suitable for small dinner groups or romantic couples. Business lunches would work too but it is an intimate space that seats only 30, so any raised voices would be heard by everyone in the room.

But I'm not there to hear anyone's secrets. My attention is focused on the food and I think it is good enough to justify the restaurant retaining its Michelin star last month.