KARACHI, PAKISTAN (DAWN/ASIA NEWS NETWORK) - The Goan community in Karachi might have shrunk, but before you enter their homes, there is always a whiff of spicy and tangy seafood at their doorstep - sharp aromas titillating the taste buds. As it turns out, cooking Goan food is a labour of love.

"I make my own masalas," says Ms Rita Lobo, in her three-room apartment in Saddar. At 79, she continues to cook for her family and grandchildren. "I used to grind the masalas on the grinding stone," she says excitedly with her eyes sparkling. "I don't do that anymore. I'm old! What to do?"

Today, she employs domestic help for the arduous task of grinding the concoction of spices - a crucial practice in Goanese cooking. 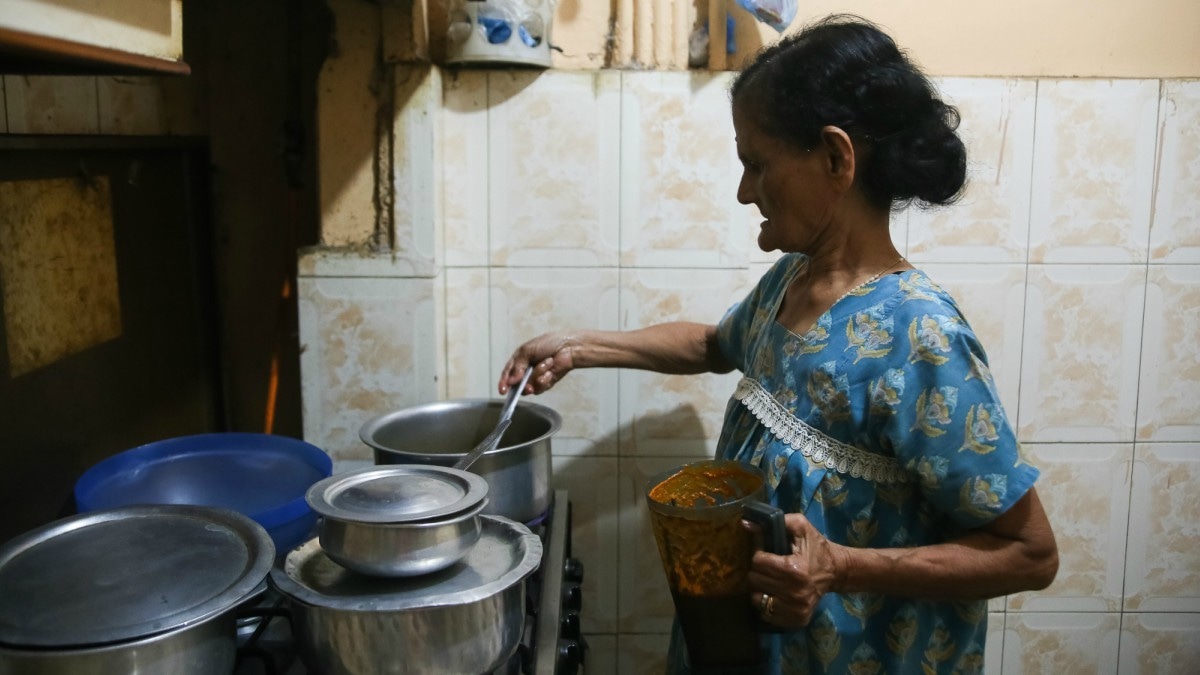 Goans arrived in Karachi much before Partition or even the Raj. Older-generation Goanese in Karachi date it to the late 19th century, after the East India Company annexed Sindh. Goa at the time was ruled by the Portuguese, and many Goans saw greener pastures in the small, nondescript town of Karachi. The British were in search for soldiers for their army and educated professionals for civilian tasks as they went about consolidating their rule over Sindh.

Although the British left in 1947, Goan heritage became part and parcel of Karachi. And as many Goanese elders relate, the Goan culinary palette was intrinsic to the bustling seaport that Karachi had become. Even in the fledgling republic, variety became the spice of life in Karachi. With seafood their first love, Goanese were adding to the palate of indigenous Karachiities - Sindhi fisherfolk - who also had their unique flavours and recipes. 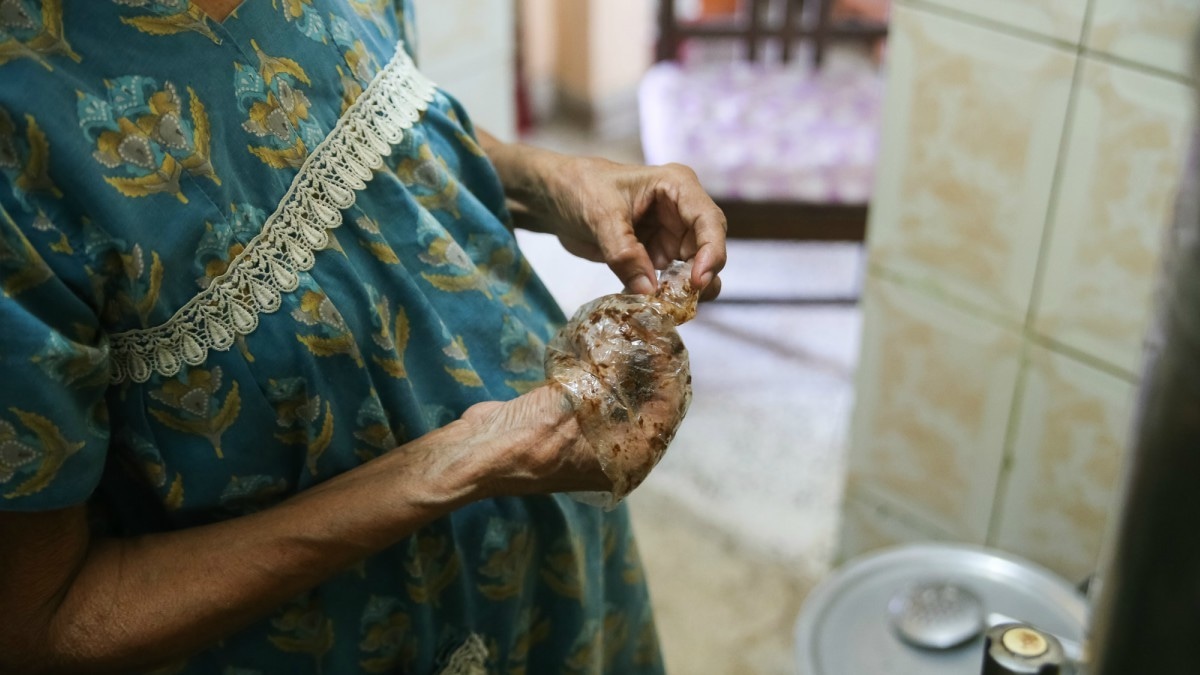 But as time passed, Goan food disappeared from the public sphere. The largest Goan eatery in the city, Pereira Bakery, shut down too. Relations between Pakistan and India soured and cross-border trade became more difficult. Not only did the cost of spices and condiments increase, but their availability was also now a major concern. As a result, Goan food left the street and went inside homes.

Perhaps it is the rise and fall of Goan food that anybody asking around for authentic Goanese cuisine is awarded a spicy welcome and a fattening meal.

"She's excited to see you," says a neighbour. The "she" in question is 72-year-old Ms Cecelia Fernandes, who lives in Garden East. Even at her advanced age, she is in charge of cooking for her family. Originally from Manora Island, she learned to cook from her mother-in-law, a Goan. After developing her own "spice sense", she continues to use it today with perfection. 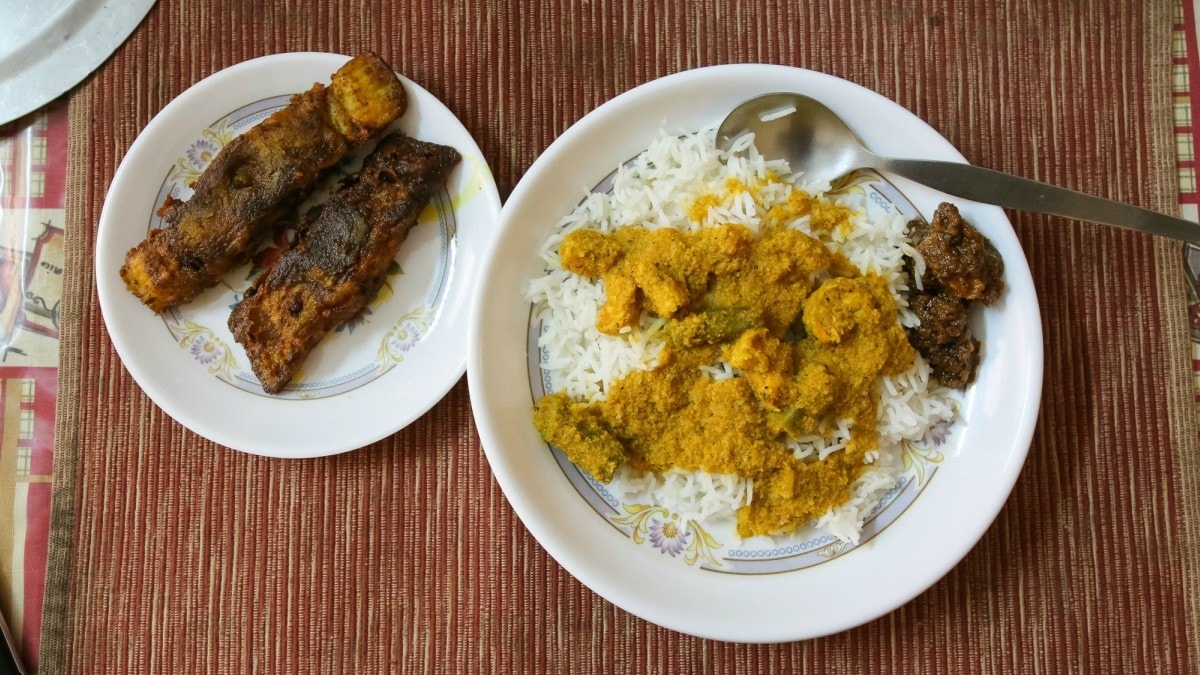 My lunch with Mr Lawrence D'Souza and his family over fried fish and prawn coconut curry.

"When she cooks, we have to make sure all the ingredients are available, otherwise she will throw a fuss," relates her daughter Diana.

For example, Ms Lobo cannot do without coconut in her curries.

"I can never compromise on coconut," she says with a tone of finality. And it is understandable, since the drupe, along with tamarind and jaggery, is an essential component of Goan cuisine. Without coconut, the family will have to go hungry since she will not cook. Or they will have to buy packaged masalas and cook themselves.

The use of ingredients has changed over time, however.

"Coconut is expensive these days." says Ms Fernandes, as a matter of fact. While Ms Lobo uses spices available at Empress Market, Ms Fernandes makes do with Indian Goan ingredients that are acquired through friends making a pilgrimage to the Indian state of Goa. "I like to use their tamarind and dark-brown jaggery (gurr) because it adds more flavour."

In her younger years, she would cook Goan curries daily. That practice has changed due to the availability of time.

"Nowadays, we don't have the time for cooking Goanese dishes," adds her daughter Diana. "We use branded recipe mix and masalas, and cook qorma, biryani or whatever is available." 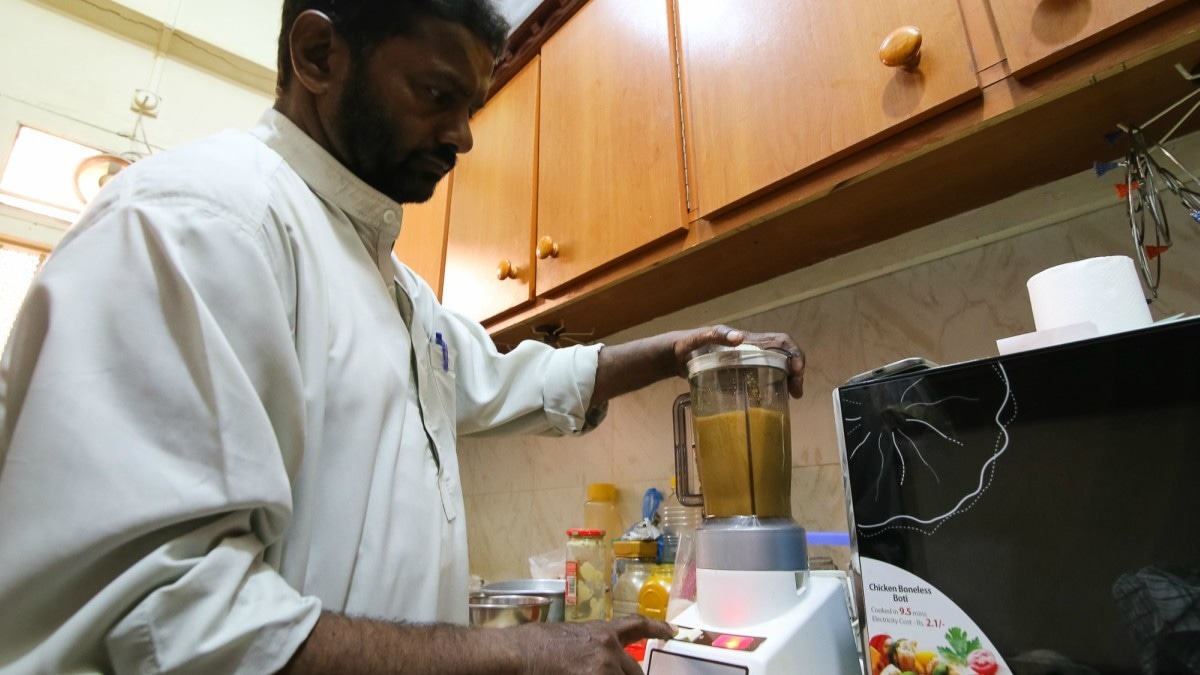 Mr Lawrence D'Souza blends masalas in a blender to save time.

"It's all fast-forward now," adds Mr Lawrence D'Souza over the whir of the blender, whose spicy contents are to be used for a lunch of prawn coconut curry and rice with fried fish for his family.

In 30 minutes of dicing, spicing, blending, cooking, caking and frying, he is done and ready to relax after his 12-hour shift at the Pakistan Steel Mills.

Time dictates how Ms Lobo, Mr D'Souza and Ms Fernandes are allowed to add inherent value to their curries, but shifting palates are also significant in third-generation Pakistani Goans. Every weekend, Ms Lobo, her children and grandchildren collect at her apartment for lunch or dinner.

"I cook biryani and kebabs," she says.

"Why don't you cook Goan dishes?"

"The children and the young lot prefer Pakistani dishes."

Does that mean that Goan cuisine in Pakistan has become localised? And if so, to what extent? 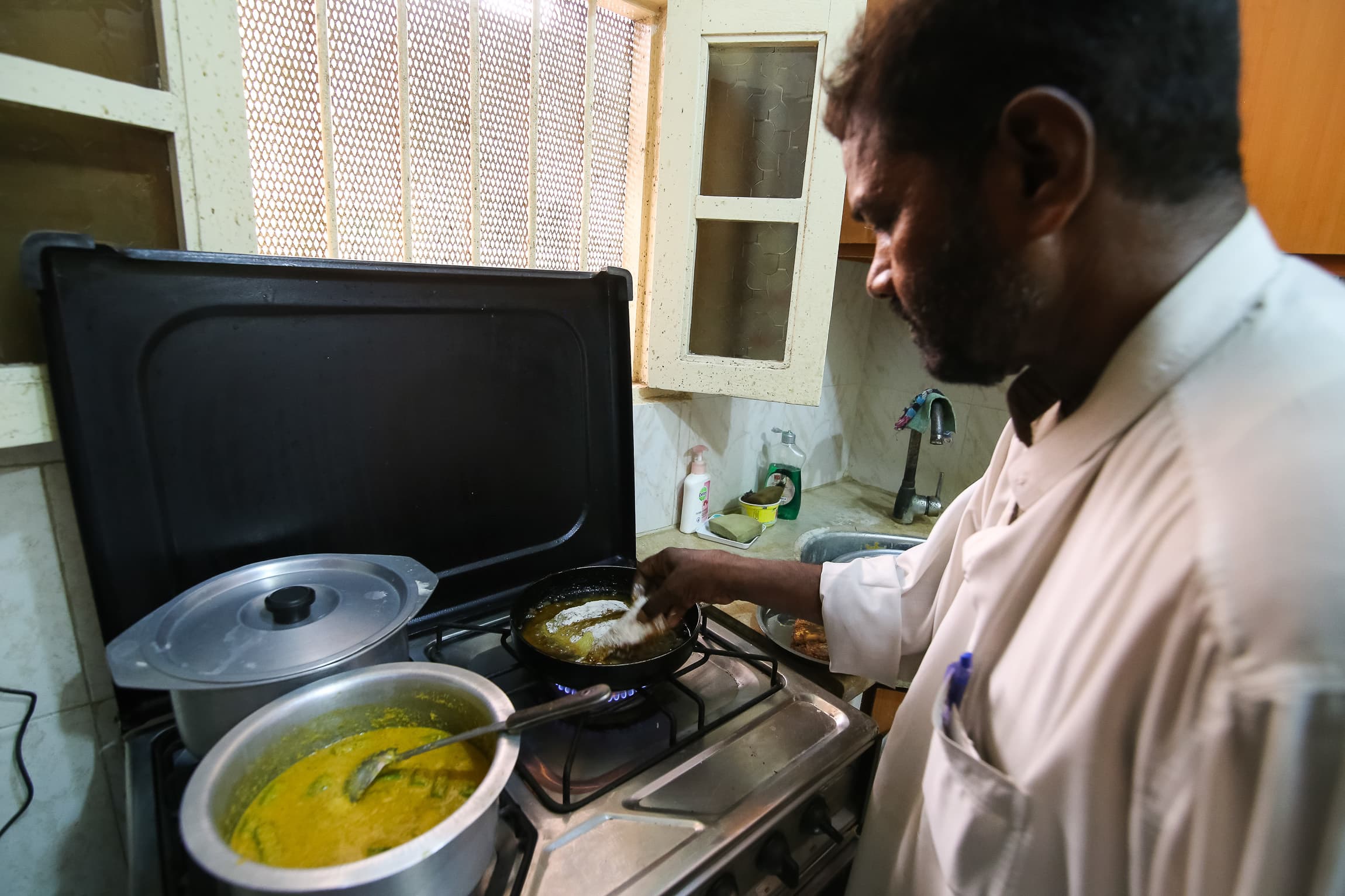 Mr Lawrence D'Souza fries the earlier prepared fish as part of the lunch.

With much of the Goan community emigrating, there is an element of loss to the city's potpourri of unique dishes available in public spaces which were once part of Karachi's colonial past. Mr Ali Raza Abidi, owner of the Biryani of the Seas (Bots) at Old Clifton, nods in agreement.

"Their loss of space hasn't enabled the community to put itself out there. But if anyone wanted to open a specific Goanese-styled restaurant, it would definitely sell to a certain clientele. If a Lebanese restaurant can do well, why can't this one?"

Over lunch, I ask Mr D'Souza on his thoughts about this idea. He doesn't sound too excited.

"If someone did begin such a restaurant, people wouldn't buy. They would say, a Christian is preparing this food." 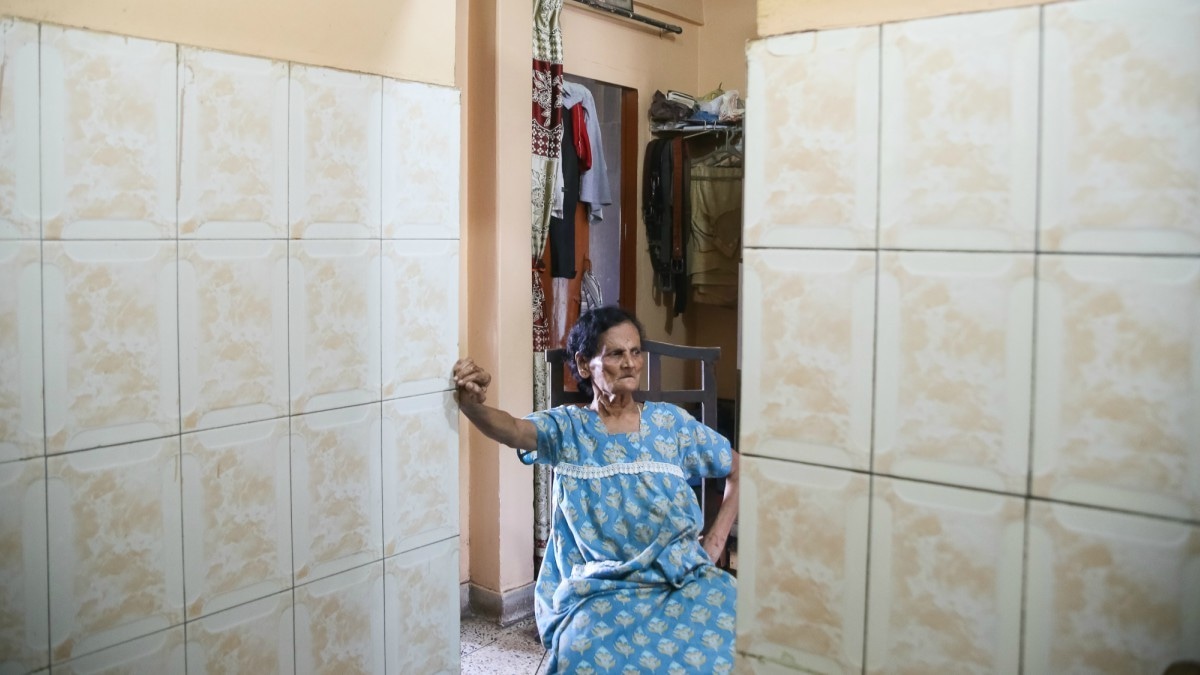 Ms Rita Lobo takes a break to cool down from the heat of the kitchen.

Bots intr­od­u­ced four Goanese dishes to its menu five years back. "A Goan lady from Cantt found us and she recommended adding Goan dishes to the menu, since there is a significant Christian (Goan) population living near Bots."

The duo collaborated and she taught the cook with a side helping from Youtube videos. Mr Abidi introduced it to the menu at both branches of the restaurant. The branch at Clifton receives more orders for the Goan dishes, compared with the one at Mehmoodabad, where the residents are more familiar with Delhi cuisine. More specifically, at the Clifton branch, crab curry sells more.

Meanwhile, Ms Belinda Fonseca is a third-generation Pakistani-Goan and runs a small catering business for Goanese cuisine from her residence in Frere Town, Cantt.

"Older Muslims and Parsis who are more familiar with authentic Goan flavours buy the dishes on my menu," she says with enthusiasm. 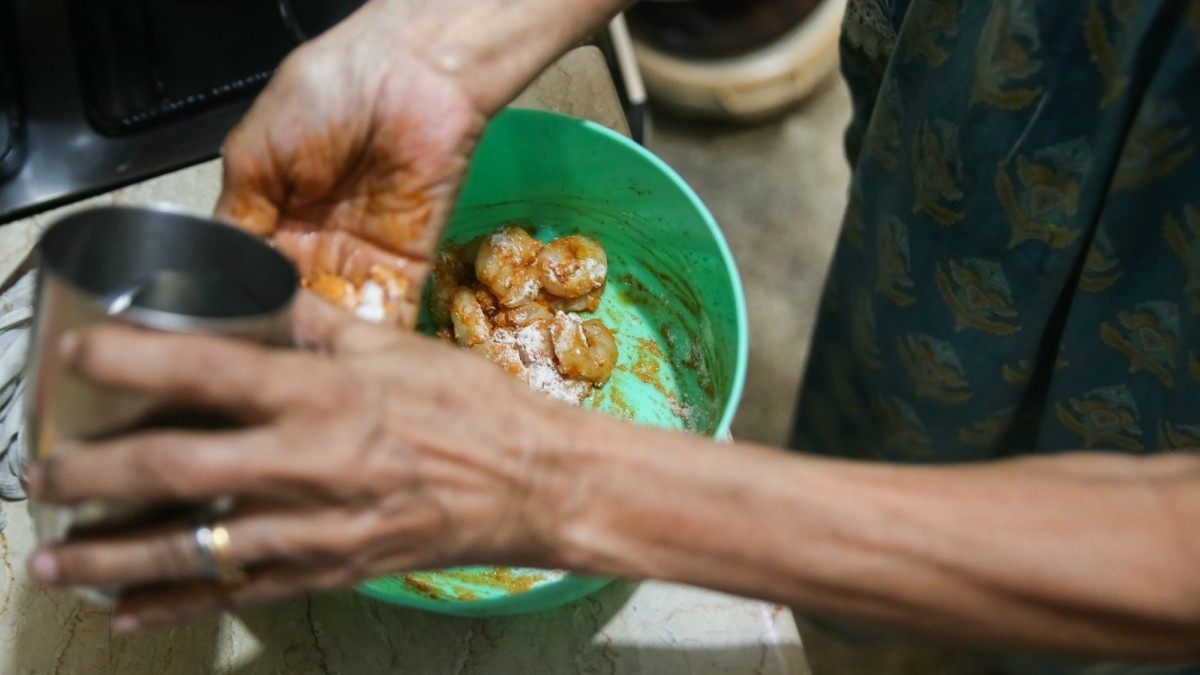 They are also her repetitive customers who, at times, crave Goan sweets and spicy-coconut curries.

"Many of them look back at the time when Goan families would send food over to their neighbours. It has a nostalgic element to it."

The food industry is competitive and constantly vies for the individual's taste buds. But there does lie a niche to reintroduce the explosive flavours of Goan dishes.

Mr Abidi adds: "If a Goan restaurant were to open, it would re-energise the locality, maybe even become a hallmark of the area."

And maybe through their interaction, food can become an enabler to jumpstart conversations about each other.