Hong Kong is the first city outside the United States to serve the Impossible Burger.

The plant-based burger patty that tastes - and bleeds - like beef has been touted a Silicon Valley disruptor that will change the multi-billion-dollar market for beef.

For its international and Asian debut, the plant-based meat substitute will also be available as the Impossible Bao, United States firm Impossible Foods said in an announcement on Thursday (April 19).

These juicy creations could soon hit our shores, with Singapore being on a shortlist of markets in Asia that the firm is eyeing to enter, The Straits Times understands.

Diners can pair this with the Impossible Chilli Cheese Fries, which is served with chili, cheddar cheese, spring onion and sour cream over fries. It is priced at HK$62.

"We are obsessed, in a good way, with burgers and doing what we can for the environment," said Beef & Liberty's top executive chef Uwe Opocensky.

"We're positive that our guests are going to love the Impossible and feel good about eating it at the same time."

For a Cantonese twist on the Impossible Burger, diners can head to Hong Kong's Little Bao and Happy Paradise, both run by chef May Chow, who was named Asia's best female chef by The World's 50 Best Restaurant awards last year.

Over at Happy Paradise, diners can dig into the Impossible Xinjiang Hot Pocket, a popular Chinese street snack that is served with pickled daikon and Xinjiang spices. It is priced at HK$88.

Impossible Foods said that the Impossible dishes are available in Hong Kong on a limited and exclusive basis through Asian importer and distributor Classic Fine Foods.

Founded in 2011 by a biochemistry professor, Impossible Foods started putting its plant-based meat burgers on restaurant menus a year ago. 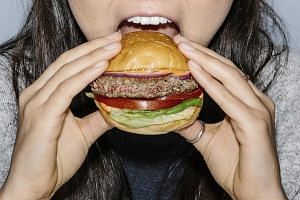 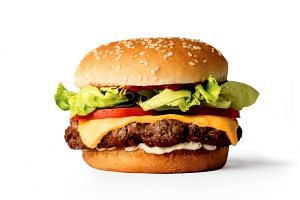 Is it still meat if it's grown in a lab? US farm lobby says no

The burgers are now offered in more than 1,400 outlets across the United States, including fast-food chain White Castle.

One of the patties' special ingredients is heme - a molecule found in animal muscle that carries oxygen in blood.

The company found that the abundance of heme it what makes meat delicious.

To make heme without wasting any resources to farm cows, the company genetically modifies yeast and uses fermentation to produce a heme protein naturally found in plants, called soy leghemoglobin.

The rest of the burger is made from natural ingredients, such as wheat, coconut oil and potatoes.

"We're confident that Hong Kong - Asia's crossroads of ideas and influences, both modern and traditional - will be home to the most innovative Impossible recipes yet."