SINGAPORE - Queues started forming Thursday night (Nov 30), ahead of the opening of the new Gong Cha outlet at SingPost Centre in Paya Lebar at noon on Friday.

The popular Taiwanese bubble tea chain had exited the scene in early June.

It has been brought back by a new franchisee, Gong Cha Singapore, helmed by Mr Kang Puay Seng, 57, former managing director and co-founder of soy milk food and beverage chain Mr Bean.

Student Daryl Yoon, 17, and his four friends, were the first ones in the queue at 10pm last night. They were enticed by the 99 free cups that the brand plans to award to the first person in the queue.

They had initially arrived at 5pm but when they saw that a queue had not formed yet, they decided to return later.

He says: "I was intending to study through the night so I thought I might as well study here."

At 11pm, Mr Kang surprised them with supper from McDonald's.

The new 850 sq ft Gong Cha outlet has 33 seats. Available are its signature offerings (from $2.20 a cup), including its alisan and oolong tea range, and toppings such as ai yu jelly, red beans milk foam and pearls. New items on the drinks menu include five smoothie options (from $4.50 to $5.90) in flavours such as mango, purple sweet potato and matcha. There are also three new types of tea latte (from $4.30 a cup), including brown sugar fresh milk oolong and strawberry popcorn fresh milk tea.

This outlet also serves food items such as chicken pie ($3.90), muffins in various flavours including blueberry, chocolate and cranberry ($3.90 each), mini chocolate lava cakes ($2.50 each) and croissants with fillings such as tuna and egg ($3.90 each). 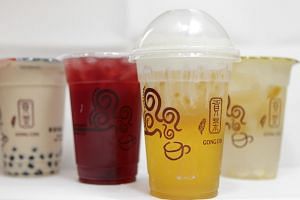 Gong Cha Singapore will have three outlets by the end of this year. Its second outlet, located at Takashimaya Shopping Centre's Basement 2, opens next Thursday, and its third outlet, at Northpoint in Yishun, will open on Dec 11.

Next year, it will open a cashless Gong Cha outlet at the National University of Singapore's University Town.

Mr Kang plans to open 50 stores islandwide in the next five years.

He says: "I believe in quality over quantity. The number of stores reflects what you can do, your ability, but quality - that is a reflection of how well you can do it."