SINGAPORE - Japan's famed Afuri ramen - known for its yuzu-scented ramen topped with charcoal-grilled pork - will open at basement one of the revamped Funan mall on June 28.

The date is in line with the mall's reopening and its brand representatives will be in Singapore then.

Its entrance into Singapore is under food and beverage group Japan Foods Holding, which specialises in Japanese food brands. The group is best known for its Ajisen Ramen chain, along with other ramen brands such as Menya Musashi, Konjiki Hototogisu at Chijmes and the recently launched Karamen at 111 Somerset.

The group confirmed that the Funan outlet here will be known as Afuri Ramen + Dumpling - the same as its branch in Portland, United States. Besides its signature yuzu shio ramen, yuzu shoyu ramen, yuzu ratan ramen (a spicy version) and yuzu tsukemen, the expanded menu will have small plates options as well as gyoza.

The ramen's light, delicate, yet flavourful yuzu broth is made with chicken, katsuobushi (bonito flakes), dried kombu (kelp) and vegetables.

Afuri is named after Mount Afuri in Japan's Kanagawa prefecture. According to its website, it first started in 2001, known as Zund-Bar, at the foot of Mount Afuri.

The Afuri brand then started in 2003, when it opened in Ebisu, Tokyo. Since then, it has expanded to 15 stores worldwide with locations including Lisbon, Portugal. 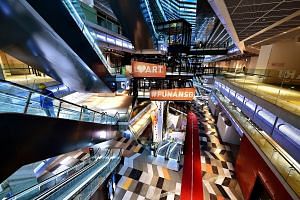 Prior to Afuri opening here, fans of the ramen can get their fix from its instant noodle options available at selected supermarkets and Japanese speciality food marts.