LONDON (REUTERS) - A growing global population means we may have to get used to eating insects.

"When you think of crickets you think of the bug, you think of the animal itself, and there's that obvious disgust factor. Once you understand that such a powerful ingredient can be concealed in something that is quite friendly looking and tasty looking....Not bad!" said Carbajo, a RCA graduate student.

Rich in iron, the snack is aimed at women aged 16-49 suffering from iron deficiency.

Yokomo was one of many environmental products displayed at the Royal College of Art Graduate Exhibition Show.

It is a multi-level device, with glass trays used to grow material in different stages. 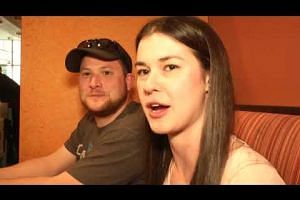 You want tarantula with that? At US burger joint, it's an option 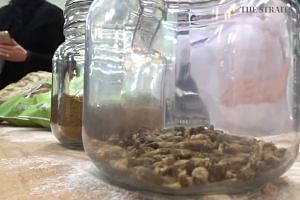 "There's a mycelium incubator where you grow the mushrooms and take the mycelium from them and put them in a mould to grow things like cups or packaging to replace plastic packaging and then the other system is a bacterial silo system where you have growth baths - and then you add the bacteria just into water and then add a waste system such as fruit and vegetable waste and then it will eat the nutrients from the glucose of that and then grow cellulose," said Gregory.

"There are pumps at the bottom of the structure that channel the air through the chambers of the structure where microalgae converts the carbon dioxide into oxygen with the energy from the sunlight, so it's photo-synthesis," she said.

Nasso says a 15 litre culture can purify a 15 square metre room and only needs replacing four times a year.