SINGAPORE - Eleven new restaurants have been awarded one Michelin star at a glitzy gala for the Singapore Michelin Guide held on Thursday (June 29) at The Fullerton Hotel.

Waku Ghin, by celebrity chef Tetsuya Wakuda, was bumped up to two stars while Joel Robouchon Restaurant remained the only three-starred establishment in Singapore.

Chef Wakuda, 58, said: "I didn't expect it but it was a very nice surprise. Every year I ask 'how can I get better?' We want to keep being on the list and push harder. Happy customers are the most important.

"It's nice to get a reward to share with the staff. My team is everything. We are very fortunate."

About 500 guests attended the event, including corporate head honchos, restaurateurs, chefs, as well as members of the public who paid $595++ a person to attend the sold-out affair. 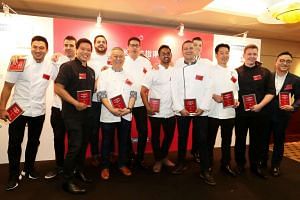 Other guest chefs - chef Tam Kwok Fung of two-Michelin-starred Jade Dragon in Macau; and chef Curtis Duffy of three-Michelin-starred Grace in Chicago, United States - are also part of the chef brigade that cooked the dinner.

The chefs began arriving at The Fullerton at about 5pm.

Chef owner Malcolm Lee, 33, of the one-Michelin-starred Candlenut professed that he was feeling nervous: "At first I wasn't so worried but other people were worried for me and then they made me worried. Even today everyone was texting me and I didn't want to look at my messages.

"My guys put in a lot of hours of hard work so whatever happens, it's all their hard work."

The Chefs' Corner at the Michelin Guide ceremony 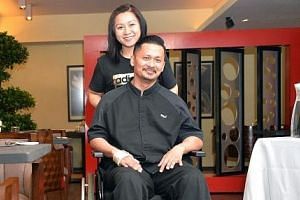 By 5.30pm, most invited chefs had arrived at the venue and were being escorted to and from a holding room. They had been briefed not to talk to the press before the gala, and were walking very fast to avoid being intercepted by media.

One of the highlights of the evening was when wheelchair-bound chef Haikal Johari of Alma by Juan Amador got up and walked up on stage to receive the restaurant's one Michelin star award. The executive chef was badly injured in a road accident in Thailand in 2015.

Chef Rishi Naleendra, 32, of Cheek By Jowl, was bowled over by the award: "We've been open for 16 months. We were not expecting to win this year. The team worked unbelievably hard so it's really nice to get this award.

"When I first heard the news I thought it was a mistake. I couldn't sleep after that. I kept asking 'Can we check the email again?' I'll always keep doing what I do, this is what makes me really happy."

The Michelin Guide Singapore is put out by French tyre company Michelin in collaboration with the Singapore Tourism Board and wine authority Robert Parker Wine Advocate. Restaurants are assessed by Michelin inspectors, who dine independently and anonymously, and pay for all their meals. The judging criteria include the quality of food, cooking techniques and value for money.

Mr Ellis said Michelin has not recruited any local inspectors.

"It is still on our radar to get local inspectors as it is a long-drawn out process for hiring. It takes six months to one year to train an inspector."