SINGAPORE - You can get a plate of char kway teow for only 50 cents at this hawker stall, but there's a catch - you need to bring your own egg.

The bargain is being offered by Mr Dominic Neo, 44, at his stall, Liang Ji Kway Teow King, in celebration of National Day on Aug 9.

Mr Neo, who has been a hawker for 15 years, explained that his purpose is to allow the younger generation to experience how their grandparents ordered char kway teow in the past, when the practice was commonplace.

"Sooner or later, all this traditional food will be lost," he said, adding that he hopes customers will take their children to try his cooking.

Those who do not bring their own eggs can still order from the stall, but will need to pay $1 instead.

Mr Neo promised that he will be cooking regular-sized portions plate by plate to ensure their quality.

He ran this promotion last year for three days, attracting hundreds of customers and cooking till his hands hurt. 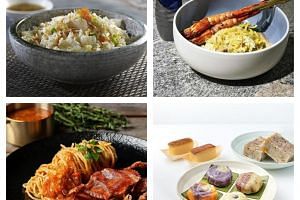 Eateries roll out eats in local flavours ahead of National Day

"This year, it's for one day because I want to be able to sell for a bit longer (on the day itself)," he said.

Aside from the physical exhaustion, such a promotion will take a bite out of Mr Neo's pocket as well. He usually sells his char kway teow for $3 a plate.

He said: "I hope on National Day, everyone will have a good day and enjoy. I'm just doing my part for my country."

The promotion will start at 11am and run until all plates are sold out. The stall will close at 9pm. In order to be fair to those who arrive later, customers are entitled to only two plates per person.