Titled Orchard Road Fashion Scramble, the fashion showcase opened with a flash mob of more than 100 dancers at the intersection between The Heeren, Mandarin Gallery, and retail store Design Orchard.

Then, in nine 50-second sequences timed between traffic lights, 100 models walked the perimeter of and diagonally inside the yellow traffic square, donning designs from both local and international designers.

The Fashion Scramble is one way to reach out to the younger generation, said Mr R. Dhinakaran, president of the Singapore Retailers Association, which organised GSS: Experience Singapore.

"The traditional GSS in the past did many things the traditional way. We realised this is no longer relevant for the younger generation," he said, adding that the local brands curated for the runway were selected on how they "fit in with the young people".

"We have to try new things out - after 25 years we wanted to change the format to make it more experiential." 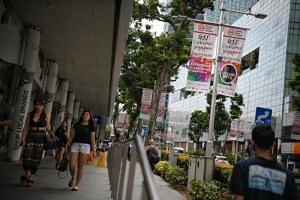 GSS takes on a festive air

The annual sale, which was launched on Friday, is now shorter by half, and ends five weeks later on July 28.

Other new initiatives for GSS this year include screenings of locally-made films and a pop-up retail showcase Great Singapore Street Pop-Up, which runs along the Orchard Road stretch till June 30.

"Experiences are still about the physical world and physical places," said Dr Tan Wu Meng, Senior Parliamentary Secretary for Trade and Industry and Foreign Affairs, at the launch of GSS: Experience Singapore. He was the guest of honour at the launch ceremony.

"For our retailers, the key is to meet the needs of today's customers and tomorrow's customers; and to stay relevant," he added.

For young designer Kelly Lee, seeing her works paraded down Orchard Road for the first time was a nerve-racking affair. "Honestly I felt really overwhelmed - when I was working on my designs I never thought they would be displayed to the public on such a grand scale," said the 20-year-old fresh graduate from Lasalle.

Bridalwear designer Fatimah Mohsin was just thankful none of the gowns from her line, Fatimah Mohsin The Wedding Gallery, tore during the catwalk. The 44-year-old also has a retail container at the Great Singapore Street Pop-Up selling home furnishings from her second brand, PropUpStore.

Sales are off to a promising start, said Madam Fatimah, who opened for business outside Mandarin Gallery at 11am. She has already had Japanese tourists purchasing lanterns.

As for founder of Fraction Design Studio Celine Ng, 28, the first day of GSS has not turned into actual sales yet, but she is hopeful.

The furniture designer launched an exclusive two-piece set of overlay tables for Robinsons The Heeren. She is hoping to sell three of the made-to-order sets, which are only available during the five week-long GSS.

"The price is a little on the higher side, but there is already a lot of interest from the public," she said.