SINGAPORE - At least 300 people were already in queue at 6.40am on Thursday (July 13) for Louis Vuitton's collaboration with New York-based streetwear label Supreme when The Straits Times visited the luxury brand's store at Ion Orchard.

The shoppers were hoping to get their hands on a raffle ticket that will guarantee them entry to the collection's launch on Friday.

The collection has garnered so much buzz that it prompted the French luxury brand to organise the raffle registration on Thursday.

The line for the LVxSupreme collaboration on Thursday morning

Even though the registration started at 7am, excited fans had started queueing outside the store last Friday in a false start - not knowing that the collection will be available for sale in Singapore only from 10.30am on Friday.

They were eventually turned away.

Those in line on Thursday morning had to hope that their ballot number, which was auto-generated at random by Louis Vuitton staff on a iPad, would fall between 1 and 350 making them eligible for a raffle ticket to Friday's launch.

Anyone with a number outside that range will not get a ticket.

The one-time balloting was for crowd-control purposes, and non-ticket holders will be allowed to shop items from the collaboration only after all the ticket holders have bought their items - that is, if there are any items left.

Supreme enjoys cult-like popularity mainly due to the brand's association with popular skateboarders such as Mark Gonzales and Sean Pablo.

Mr Muhammad Syahir Mohamad Tahir, 17, was the first person in line on Thursday morning. He had been queueing since 6pm on Wednesday.

But as his ballot number turned out to be 630, he did not get a raffle ticket. He walked away disappointed and said he was heading home. 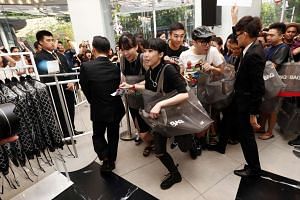 He had been hoping to get his hands on some shirts and bags from the collaboration, which was unveiled during Men's Fashion Week in Paris in January.

The collaboration includes items such as leather backpacks, denim jackets and iPhone cases, most of which will be branded in Supreme's signature red hue or Louis Vuitton's monogram print.

Louis Vuitton declined to reveal prices of the items in the collaboration.

She had started queuing since 10pm on Wednesday night along with her husband. He had brought chairs for both of them to sit on. She rushed off quickly after receiving her ticket to go to work.

Shoppers who want to shop for other Louis Vuitton items not in the collaboration can still enter the store via a separate entrance.