The store, which will operate round the clock, will be called Don Don Donki - because a Don Quijote restaurant already exists here in Dempsey Road. However, the double-storey 1,397 sq m Singapore outlet promises to have the same range and eclectic mix of products as its outlets in Japan.

The brand is known for offering a wide variety of made- and designed-in-Japan products - everything from toilet paper to second-hand Rolex watches - under one roof, often at low prices.

Founded in 1978 by current chairman Takao Yasuda, the brand now has 368 stores in Japan, Hawaii and the United States and rang in close to 828.8 billion yen (S$10 billion) in annual sales for the fiscal year ended on June 30 this year.

Aiming for an everything-under-one-roof type concept, the brand is also known to give autonomy - for product selection and pricing - to individual stores, meaning that stores in different areas often sell items that are best suited to the needs of its customers.

The store opening here is in partnership with Hokkaido Marche, which will be opening its hybrid restaurant and food court concept next to the discount store by end-January.

When Hokkaido Marche opens, it will offer eight self-service style outlets and will have a night market concept for dinner hours. Together, the two brands plan to market Japanese food, products and restaurants to Singaporeans at pocket-friendly prices.

The seeds for the Singapore store were sown when founder and chairman of Don Quijote Takao Yasuda moved here in 2015 and found how expensive items were in Singapore.

"Back then, I was semi-retired but when I moved to Singapore, it was surprising to see the price difference between Singapore and Japan," he said during a press conference on Wednesday (Nov 29). "What costs one dollar in Japan is sometimes two or three dollars here."

So when he was approached by Hokkaido Marche to partner and open their concepts in Singapore, he agreed immediately.

For Mr Yasuda, the decision to open in Singapore is a strategic one. For one thing, he said that the items here are about 20 per cent more expensive than identical ones the chain sells in Japan, due to higher costs, but are still priced lower compared with competitors here.

Don Don Donki's current product selection of about 30,000 items was curated for Singapore and spans a wide array of products including fresh vegetables and meats, groceries and beverages, party goods, costumes, clothing, make-up and household products. A third of the product selection is from Hokkaido.

The move to open a store here is also a strategic one as Mr Yasuda has plans to expand into South-east Asia. Singapore, he said, serves as an important regional headquarters for the business. There are also plans to expand here, he said. 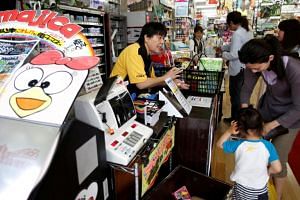 There are already plans to open a second store in 100am mall in Tanjong Pagar by June next year and, hopefully, have at least 10 stores in Singapore in the next four to five years.

"Singapore is a very important market for us... It is also a good base for us as people speak English here and it makes it easier for us to expand globally," said Mr Yasuda.

"I have shopped at their stores and I'm quite excited for it to open in Singapore," said the student. "Even though it's not a one-price discount store like some others in Singapore, I feel like things from the brand are of very high quality and very affordable for Japanese items.

"Plus their snacks and sushi selection are always very good."