SINGAPORE - After a quarter-century of Zouk playing cutting-edge and popular electronic and dance music, it was a 1970s pop classic that was among the tunes that marked the closing of an era for the local nightlife institution at Jiak Kim Street on the morning of Sunday (Dec 4).

When The Beatles' Let It Be played, it brought on tears among the almost 300-strong crowd still in Zouk's main room at 7.40am as the house lights came on.

The tears might have been cathartic as well - the club's last night of operations, on Saturday, Dec 3, had started with a long queue that formed at least four hours before doors were officially opened at 11pm.

The selection of Let It Be was truly a poignant tribute to a trailblazer of the nightlife scene in Singapore. While the club's founder Lincoln Cheng himself was absent, the song alluded to his favourite closing song, Imagine by John Lennon, which Zouk traditionally played at midnight across all three of its rooms on occasions such as New Year's Eve.

But towards the absolute end at Jiak Kim Street, before Zouk's move to Clarke Quay on Dec 17, partygoers and Zouk's staff and crew alike seemed unwilling to let it be. They came together to say goodbye with one last dance, repeatedly imploring resident DJs Hong and Lincey to play "one more song" as each song ended.

The significance of the night - and day - was apparently lost on no one, not even the policemen, who were there for their regular procedural checks. The men in blue took the chance to take a keepsake photo outside Zouk at Jiak Kim Street as the last clubbers left at around 8.30am.

Zouk's One World, One Music, One Tribe and One Dance - the Zouk slogan that hangs in the main room- leaves no one behind.

The finale parties on Dec 2 and 3 saw the full stable of Zouk's past and present DJs taking to the decks, for a 4,000-strong crowd that included even a runner from the Standard Chartered marathon in full athletic regalia.

At 6am, Mr Chan Eu Jin, 36, turned up. He had run 7km to Zouk from Gardens by the Bay because he wanted to be a part of the momentous occasion.

The first of six runners in the Ekiden run, a relay event where a team of six runners complete the marathon, he says he passed his sash to his running buddy - and jogged to Zouk, en route home.

The geotechnical engineer described the club as his "alma mater", and was visibly emotional as he said: "Zouk may be moving on, but my heart will always be at Jiak Kim."

Singaporean electronic dance music producer Manfred Lim, or Myrne, did not run, but he too completed a personal milestone of sorts at Zouk - more than one milestone, actually. 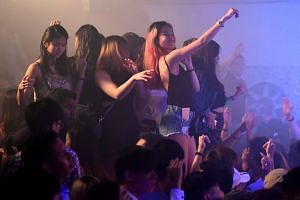 Zouk was the first club he went to a week after his 18th birthday. It also gave 21-year-old his first break to play a show in a local club in February this year. So, Lim, who made headlines for being signed to big-name American producer Diplo's label last year, says it was important for him to be there.

It was also a fitting bookend to his father having been at Zouk on day one of its operations.

Other partygoers made their marks literally on the Zouk facade, with silver markers the staff provided.

Those drawings and writings will probably not last long, though. Zouk's Jiak Kim Street structure, originally comprising three derelict warehouses built along the Singapore River in 1919, will have to be stripped down to its original state before being returned to the authorities.

Zouk's lease at Jiak Kim Street was extended several times since it first ended in 2012, but the club had to find a new location when it was not renewed in mid-2015. The club was also sold to conglomerate Genting Hong Kong, for an undiclosed sum at the end of last year.

Long-time resident DJ Jeremy Boon, who has been with the club since the very beginning, says whatever takes over the space eventually - be it retail, housing or otherwise - will have big shoes to fill.

"Whatever the next place is to come and take over the property, I think it's too much pressure to fill the shoes of Zouk," he said.