WASHINGTON (THE WASHINGTON POST) - The fall from grace has been swift for actor Kevin Spacey.

Less than a week after he publicly addressed allegations of sexual misconduct, the actor has been cut off from his most recent, high-profile projects."Netflix will not be involved with any further production of House of Cards that includes Kevin Spacey," the streaming service said in a statement Saturday.

Spacey also starred in the movie Gore about writer Gore Vidal. Netflix announced it wouldn't be releasing the film, which was in post-production.

In a story published by BuzzFeed Oct. 29, actor Anthony Rapp publicly accused Spacey of making sexual advances when Rapp was just 14, and Spacey would have been 26. Spacey said he didn't recall the incident but said he was "beyond horrified" by the story and apologised "if I did behave as (Rapp) describes." In that same statement, released hours after the BuzzFeed story, Spacey also came out as gay, drawing criticism from those who said he was conflating assaulting a minor with homosexuality.

Since then, more allegations of sexual harassment and assault - some anonymous - have become public. But Spacey has remained silent, with a representative telling media outlets that he was "taking the time necessary to seek evaluation and treatment." (His publicist dropped him as a client, the Los Angeles Times reported Thursday).

Production company Media Rights Capital confirmed in a statement that it was involved in an ongoing investigation into "serious allegations" about Spacey's behaviour on the House of Cards set. MRC and Netflix "will continue to evaluate a creative path forward for the program during the hiatus," the company statement added.

While House of Cards hasn't been as critically acclaimed for its later seasons, it is a landmark series for Netflix. During the course of its five-season run, Spacey and Robin Wright each won a Golden Globe and received five Emmy nominations apiece for their portrayals of Frank and Claire Underwood.

Frank Underwood also became a cultural phenomenon. Obama administration officials appeared in a spoof video with the fictional president during the 2013 White House correspondents' dinner, and President Barack Obama himself impersonated the Spacey character in a 2015 April Fools' Day video.

Widely credited with putting the streaming service on the map for original content, House of Cards debuted in 2013 as Netflix's first original drama series. Since then, Netflix has released other acclaimed original series, such as Orange is the New Black, The Crown and Stranger Things. Netflix is reportedly working on spin-offs of Cards. One of the three possible ideas, according to Variety, revolves around Frank Underwood's former chief of staff, Doug Stamper, who is played by Michael Kelly.

Amid the news of Spacey's departure, several fans on social media called for a Claire Underwood-centric show. "Can Robin Wright just be the lead of House of Cards now?" Oscar-nominated actress Jessica Chastain tweeted Friday. "We're ready for it." A widely shared tweet from Vulture writer Mark Harris predicted the opening of Season 6 for the show: "Wide shot. Rainy funeral at Arlington. Robin Wright: 'If there's one thing my late husband stood for ... '"If Netflix does try to salvage the House of Cards universe, it wouldn't be unprecedented. Several TV shows have had to abruptly shift course because of stars' off-screen controversies. 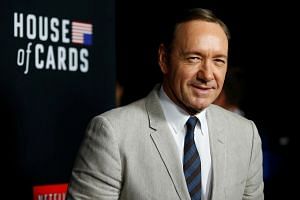 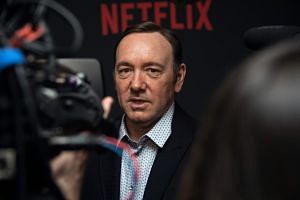 Charlie Sheen's character was killed off at the end of the eighth season of Two and a Half Men after a very public meltdown, which included making disparaging comments about show creator Chuck Lorre. The show continued the following season with Ashton Kutcher playing a new lead character.

The hit medical drama Grey's Anatomy was also beset with controversy just a few years into its run when ABC dropped Isaiah Washington in 2007. The actor, who played Dr. Preston Burke, reportedly used a homophobic slur in reference to a co-star; a few months later, he used it in front of reporters at the Golden Globes as he was defending himself. Burke would soon be written out of the series as leaving his fiancee Cristina at the altar.

Columbus Short, who played Harrison Wright on Scandal, was let go from the show after three seasons amid spousal abuse claims. On the show, Wright, a member of Olivia Pope's crisis management team, was killed off.

While it may be possible to take House of Cards in a new direction without Spacey, will viewers be interested? Spacey, who also served as an executive producer, is synonymous with the show. And while other series have managed to move on after a star's indiscretions, perhaps it will be too challenging to watch a story set in Underwood's Washington without being reminded of why Spacey isn't there anymore.