LONDON (AFP) - The world of showbiz was in mourning on Sunday for Cilla Black after her death at the age of 72.

The 1960s pop star was championed by The Beatles and later became one of Britain's best-loved television presenters.

Black's publicist confirmed her death in a brief statement. Media reports citing local police said she died at her home in Estepona near Marbella in southern Spain.

Warm, kind and full of laughs, the working-class redhead from Liverpool - known nationwide simply as "Cilla" - was a fixture on British TV screens for more than 50 years. 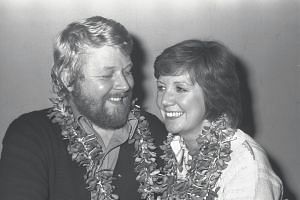 Born Priscilla White, she started out working in the cloakroom at the Cavern club, where The Beatles were first spotted, before taking to the stage herself.

The band championed Black and introduced her to their manager Brian Epstein, who signed her.

Former Beatle Paul McCartney called Black a "lovely girl who infected everyone with her great spirit" and called it "a privilege to know and love her." Beatles drummer Ringo Starr wrote on Twitter "she was a good friend we will all miss her".

Black released her first single in 1963 and the following year had two Number One hits, "You're My World" and "Anyone Who Had a Heart". She went on to release 14 albums.

In 1968, she began hosting her own television talk show, beginning a broadcasting career that saw her present some of Britain's most popular programmes over half a century.

These included "Surprise Surprise", a show that involved surprising members of the public with long-lost loved ones or fulfilling long-held dreams.

Another hit was "Blind Date", a matchmaking show where she would interview each candidate with the catchphrase "What's your name and where do you come from?"

Singer Cliff Richard said he would miss her dearly, adding: "I will always think of her as outrageous, funny, incredibly gifted but above all, full of heart.

"She was a very special person, and I have lost a very wonderful friend."

Actress Joan Collins described her as a "resplendent and rare talent", while Hollywood actor Russell Crowe said on Twitter: "Thanks for everything Cilla."

In an emailed statement, her publicist Nick Fiveash confirmed "with deep sorrow" that Black had died.

"Details of her death will be announced following the coroner's report," the statement said. "Her family have asked for their privacy to be respected at this time."

A spokesman for Spanish police said everything pointed to Black having died of natural causes, the Daily Telegraph and Daily Mirror newspapers reported.

Black was made an OBE in 1997 and last year was given a special award from the British Academy of Film and Television Arts (BAFTA), which called her an "icon".

In its citation, BAFTA said she had hosted more than 500 television shows and made around 400 guest appearances on others, regularly drawing audiences of 18 million people.

Prime Minister David Cameron said his thoughts were with her family and praised her "huge talent", saying she "made a significant contribution to public life in Britain".

Scotland's First Minister Nicola Sturgeon described her as "one of my childhood idols".

"My earliest memory of having a tantrum was over Cilla. I wanted her album. My mum and dad said no - my grandad said yes. I was four," the Scottish nationalist leader said.

Black had three sons as well as a daughter, who died in infancy, with her late husband and manager Bobby Willis. He died of liver and lung cancer in 1999.