PARIS (AFP) - The world premiere of one of the most cursed films in cinema history at the Cannes film festival was thrown into serious doubt on Wednesday (April 25) when it was hit by a new legal challenge.

Lawyers for a former producer of Terry Gilliam's disaster-plagued The Man Who Killed Don Quixote - which was to close the world's top film festival next month - said they will to try to stop it being shown.

They said they would ask French judges to ban the screening and halt the release of the film which the Monty Python veteran has laboured on for nearly two decades.

Showing the movie at Cannes would be "in defiance of three judicial decisions", they claimed in a statement to AFP.

A judicial source confirmed that their demand for a ban will be heard on May 7, the day before the Cannes film festival begins.

Producer Paulo Branco claims that the film, with Star Wars actor Adam Driver and Jonathan Pryce, is "illegal" and that his Alfama Films rather than Gilliam owns the rights to it.

Judges in France and Britain have sided with the Portuguese producer but the American-born director has challenged the French ruling and a Paris appeal court will give its decision in June.

Branco's son, lawyer Juan Branco - who also represents WikiLeaks' Julian Assange - accused Gilliam and the festival organisers of trying to "railroad" through the Cannes premiere and a subsequent release in France before the courts had their final say.

He told AFP on Tuesday that "we could end up with the closing film (of the festival) at risk of being cancelled."

Less than 24 hours later he filed a legal bid to stop the film being shown without Alfama Films' permission.

Gilliam argues that Branco senior lost his stake in the movie when he failed to raise enough money to make Cervantes' "unfilmable" novel.

The producer then tried to block a new and successful shoot last year, but his bid failed in the courts. 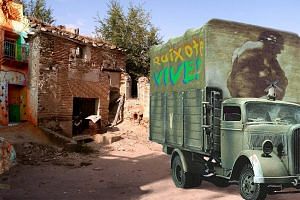 Gilliam told AFP last month that Branco had "nothing to do with the (final) film. His demands are laughable, absurd. He is trying to make as much money as he possibly can from a film he did not produce," he added.

The film's French distributor, Philippe Aigle, of Oceans Films Distribution, insisted that the "contract between Gilliam and Branco had been terminated."

But Juan Branco strongly denied this and said the film could only be released if Gilliam reached an agreement with his father.

He later ramped up the war of words on Twitter, saying Gilliam and his new producers "knew that law was against them, but they have tried to play a killer poker hand with (Cannes film festival director) Thierry Fremaux" by premiering the film at the festival.

The tortured saga of the film's making has already been the subject of an acclaimed 2002 documentary, Lost In La Mancha.

Gilliam's various attempts to shoot the rambling, surreal story have been beset by a legion of woes - both natural and human. The set was washed away during an aborted attempt to make it in 2000 starring Johnny Depp, when the lead actor Jean Rochefort also had to be airlifted to hospital after falling ill.

A host of Hollywood stars including Ewan McGregor, John Hurt, Robert Duvall and Jack O'Connell were later linked with the project, but each time the production fell through.