The three-day estimate left the film well behind two recent predecessors in the popular sci-fi franchise. The 2016 film Rogue One made US$64 million in its second weekend while last year's The Last Jedi did even better, at US$71 million, according to Variety.

Some film analysts blame Star Wars fatigue. Even by the standards of today's sequel/prequel-heavy Hollywood, the franchise has been prolific.

Still, the Disney/Lucasfilm collaboration, starring Alden Ehrenreich as a younger version of the swashbuckling space pilot, has amassed a cumulative global total of US$264 million, something even Chewbacca probably would not sneeze at.

A strong second in North American theaters was Deadpool 2 from 20th Century Fox, at US$23.3 million. That movie, the 11th installment in the X-Men series based on Marvel Comics characters, stars Ryan Reynolds as the surly title character.

In third spot was a new release, Adrift from STX Films, at US$11.5 million. The movie stars Shailene Woodley and Sam Claflin in the true-life story of a young couple whose sailboat is slammed by a hurricane in mid-ocean, leaving Claflin badly injured, the boat in ruins and Woodley having to find the way back without navigation or communication tools.

In its sixth week out, Disney's Avengers: Infinity War performed well, pulling in US$10.4 million for fourth place. 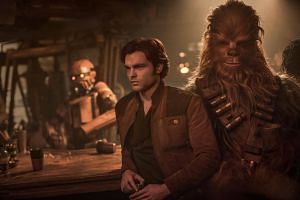 The film, starring Robert Downey Jr., Benedict Cumberbatch and Scarlett Johansson, has now taken in US$643 million domestically and a resounding US$1.96 billion worldwide, making it the fourth biggest global release of all time.

In fifth in North America was Paramount's rom-com Book Club, at US$6.8 million.