A drop-dead gorgeous soldier (Song Joong Ki) meets a lovely surgeon (Song Hye Kyo) in a hospital and wastes no time making advances to her, as she sews up his gunshot wound and suggests he has it sterilised regularly.

"There is a clinic in the army, right?" she asks.

"May I come here?" he answers, locking his eyes on her face.

Welcome back to Planet Kim Eun Sook. After the ponderous Inheritors (2013), the K-drama writer extraordinaire (Secret Garden, 2010; City Hall, 2009) has regained her form with Descendants Of The Sun, her red-hot latest show where the romantic action between exceptionally good-looking individuals is often as fast and furious as the banter.

(Seriously, "drop-dead gorgeous" and "lovely" might be actual character descriptions in the screenplay for the drama, which seems more lookist than is usual in South Korean television. It's quite possible to estimate the size of an actor's role here by looking at his face.) 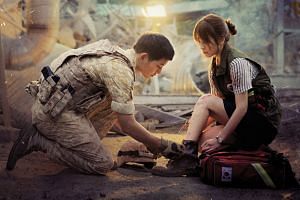 Although Descendants begins with a military incident between the two Koreas, any anxiety about too much ripped-from-the-headlines realism intruding on the world of the drama should dissipate by the end of episode one, when the soldier succeeds in asking the surgeon out, only to have to stand her up spectacularly. He gets a call from work and has to go to the nearest rooftop to wait to be ferried to a top-secret assignment by helicopter.

As he boards and takes one last look at the doctor's forlorn figure - "I… love… you," a wistful Yoon Mi Rae sings on the soundtrack - the theme of the drama crystallises.

The surgeon is a woman with a First World problem in a five-star package. She has a mystery man who is totally into her but who keeps leaving. Yet the drama also keeps reuniting them in airbrushed, beautified real-world circumstances.

In episode two, it sends the soldier on a peacekeeping mission to Urk, a fictional war-ravaged but charming country played by Greece, then drops the surgeon in his camp. She is there not just to save children, clearly, but also to go with him for drives that are filled with stunning landscapes and romantic tension.

Episode six conjures an earthquake, possibly just so that the lovebirds can exchange searching gazes amid the chaos.

The one battlefield Kim is committed to is love, and Song Joong Ki is her sharpshooter.

In Deep Rooted Tree (2011) and The Innocent Man (2012), he showed he had the steel to play fearless or heartless men - to be taken seriously as an actor, despite his pretty face.

In Descendants, playing a man who is an ardent suitor but also a reluctant frequent deserter – “my work itself gives me the lower hand in this relationship,” he admits – Song hits the sweet spot in each of his scenes with Song Hye Kyo.

He’s bold and sexy, naughty yet guarded, or quite, quite smitten. He’s a soldier, possibly a killer and definitely a lover.

Descendants Of The Sun

Apps such as Viu, any time