NEW YORK (REUTERS) - Singer R. Kelly pleaded not guilty in New York on Friday (Aug 2) to charges that he ran a criminal scheme that recruited women and underage girls to have sex with him, isolating them and often controlling what they ate and when they went to the bathroom.

One of Kelly's lawyers, Douglas Anton, entered the plea to charges of racketeering and sex trafficking before Magistrate Judge Steven Tiscione in federal court in Brooklyn.

Kelly, dressed in blue and orange jail clothes, greeted the judge and answered "yes" when asked if he understood his rights.

He was otherwise silent.

The audience in the packed courtroom included more than a dozen supporters of Kelly, one of whom wore a T-shirt that said "Free R. Kelly," and two live-in girlfriends, Joycelyn Savage and Azriel Clary.

After the hearing, Anton told reporters outside the courthouse that Kelly was "irritated" and "not a happy person"since his arrest.

"Imagine that you're an innocent person and you're locked up in prison," the attorney said.

Federal prosecutors in Brooklyn say Kelly and his entourage invited women and girls backstage after concerts, kept them from friends and family and made them dependent on him financially.

Anton had said in a court filing on Wednesday that Kelly's fans were "dying to be with him" and that the charges amounted to "groupie remorse."

Gloria Allred, a lawyer who represents some of the victims and has gained fame as an advocate for women, on Friday called the filing "inaccurate and hurtful."

"They are not groupies," she said outside the courthouse."They are instead brave victims who are seeking justice." 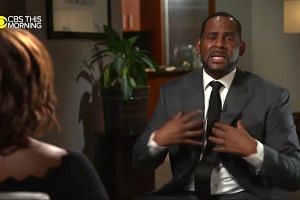 R. Kelly accuser describes incident where he tried to get her to perform sex act

The 52-year-old R&B singer known for such hits as I Believe I Can Fly and Bump N' Grind, was arrested in Chicago last month on the Brooklyn charges and a separate set of charges brought by federal prosecutors in Chicago.

The charges were brought after seven women including his ex-wife, appeared on a Lifetime network television documentary which aired in January and accused him of emotional and sexual abuse.

The singer has denied abuse allegations for decades. In 2008, he was tried on child pornography charges and found not guilty.

Chicago prosecutors said Kelly had sexual contact with five minors and recorded sexually explicit videos of some of them.

They also accused Kelly of obstructing justice by using threats and bribes, including payments of hundreds of thousands of dollars, to keep his victims quiet.

Kelly has pleaded not guilty to those charges. A judge in Chicago ordered that he remain jailed while he awaits trial.

In addition to the two federal cases, Kelly was charged with 10 counts of aggravated sexual abuse in a Cook County, Illinois state court in February. The Cook County prosecutors have accused Kelly of abusing a victim between the ages of 13 and 16 between May 2009 and January 2010.

Kelly pleaded not guilty to the state charges.

Kelly faces a maximum prison sentence of more than 200 years if convicted of all the charges pending against him.