SINGAPORE - Hit cooking competition MasterChef is set to whet the appetites of viewers here, with a local version of the show to premiere soon.

Television broadcaster Mediacorp has put out an online casting call for MasterChef Singapore.

According to the casting website, applications will close at midnight on March 25.

"For the very first time MasterChef is coming to Singapore! And we are looking for the best, brightest and tastiest chefs that the 'Little Red Dot' can muster - all of whom will battle it out in the MasterChef kitchen to be crowned Singapore's first ever MasterChef!" the website wrote.

It is stated on the casting website that interested applicants must be at least 18 years old, a Singapore citizen or permanent resident, and cannot be working as a professional chef at the moment or previously.

Also, their main source of income cannot be from preparing and cooking fresh food in a profesional environment, such as in restaurants, hotels or canteens.

The application form also asks applicants to rate their fluency in Mandarin.

MasterChef originated in Britain in 1990, and was first created by British film director Franc Roddam. 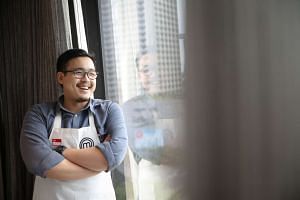 Since then, the reality television show has seen various spin-offs, including the popular MasterChef Australia, MasterChef US and Junior MasterChef.

Woo, a 29-year-old former lawyer and part-time bartender, will launch his own eatery in North Canal Road next month (March).

The Straits Times has contacted Mediacorp for more information.