Subscribers in Singapore will be able to watch the film by the end of the year through the streaming service.

Sandi Tan, 45, said in an e-mail to The Straits Times that through the Netflix deal, she is "thrilled to be able to share this film with the world".

She is preparing to show her film at the True/False Film Festival in Missouri, an event that specialises in documentaries.

In a Netflix press statement, she adds: "I've always dreamed of sharing my stranger-than-fiction film Shirkers with the widest audience possible, so am thrilled for Netflix to help tell this story to new generations of iconoclastic, creative people around the world. I hope the true story of my youthful misadventures will inspire people to turn their crazy dreams into reality."

Tan, who now lives in Pasadena, California, made a movie with her friends in 1992, when she was 19. 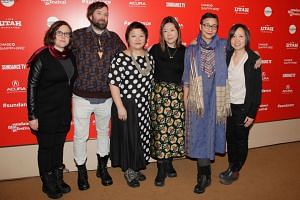 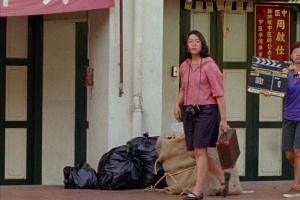 Helping her and her friends Jasmine Ng and Sophie Siddique was an American mentor, the school teacher Georges Cardona. He directed the movie about a young assassin, played by Tan. It was titled Shirkers.

Cardona disappeared with the 16mm film reels. Tan went on to work as a film critic for The Straits Times before going to Columbia University's film school. Later, she penned the epic novel The Black Isle (2012).

A few years ago, Cardona's widow sent boxes of his things to Tan's Pasadena home and in them was the long-lost film.

Using the footage in her proposal, she was accepted in the 2016 Sundance Documentary Fellows programme. She found the funds she needed to make Shirkers, the documentary about three film-loving teens, their strange American mentor and the long, winding journey the reels took to her home, where she lives with her husband, film critic John Powers.

The film contains footage the group shot in 1992, and interviews conducted in 2015 with Ng and Siddique.

The vice-president of Original Documentary Programming at Netflix, Ms Lisa Nishimura, says: "Shirkers speaks to a part of us that rarely get expressed, that bold spirit of making your own art regardless of the challenges. Sandi Tan has an exquisite, hypnotic story to tell, one that stretches from teenage rebellion to a kind of personal homecoming that all audiences can relate to."