SINGAPORE - It was a bittersweet moment for TV star Rui En at the Star Awards on Sunday night (Apr 17) as she addressed her recent controversy while collecting her All Time Favourite Artiste Award on stage.

The 35-year-old actress asked for forgiveness and wondered aloud if she is suited for the entertainment industry, given her straightforward personality.

Holding her award in her hand, she said slowly: “This is an important moment in my career but I also face a difficult obstacle. To be a good actress, I not only have to act well – but I also have to put on my best self to the public. Because I have a straightforward personality, I show all my emotions on my face, so sometimes that causes misunderstandings.

A sombre moment at #StarAwards as actress #RuiEn apologies. She's in the news for knocking over a parked motorcycle pic.twitter.com/2Gz82r4wi3 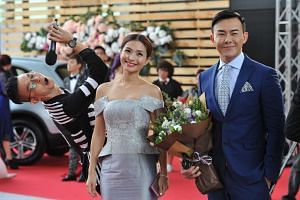 “I still wonder every day if I'm suited for the entertainment industry. Regarding the recent incident - it's still under investigation, so before the full report is out, I hope you can all forgive me. I'm unable to answer the media at this point, but I hope to apologise for whatever inconveniences this has caused. I am very sorry.”

At the end of her speech, she moved away from the microphone and gave a deep bow.

The All Time Favourite Artiste Award is given to those stars who have collected a total of 10 trophies in the Top 10 Most Popular Artiste Award category over the years.

Rui En has been the subject of controversy after she drove into and knocked down a parked motorcycle in Clementi on Tuesday afternoon (April 12). The owner of the motorcycle, Mr Bahrom Sarmiten, told local press that when approached, she had said, “Do you know who I am?”

The other TV star who took home an All Time Favourite Artiste Award on Sunday night was China-born actor Qi Yuwu, who sparked good-natured chuckles all around with a lengthy speech in which he compared himself to a tree.

“Singapore really is a garden city, because Singaporeans love plants,” quipped the 39-year-old. “When this tree moved from Guangzhou to Singapore, it did not get ostracised. In fact, it received a lot of love and care.... This tree will forever be rooted in Singapore.”

His actress wife Joanne Peh looked up at him from below the stage laughing heartily.

Rising star Carrie Wong took home the Social Media Award, while the Rocket Award, which is given to those who has shown the most improvement in the past year, was handed out to Julie Tan.

Sunday night's event was the first half of the two-part Star Awards, which will continue this coming Sunday (April 24), when the top acting awards such as those for Best Actor and Best Actress will be given out.