The win was for Bunga Sayang, about a young boy who strikes up a friendship with an old Malay neighbour. It is part of the award-winning film anthology 7 Letters (2015).

Bunga Sayang is the first Singaporean film to win the Best Asian Short Film award in the festival's 11 years. A total of 3,548 films were submitted and 85 of them were shortlisted for the nomination.

The festival jury said: "The power of Tan's work is his ability to conjure up slices of Singaporean spirit that reveal both the nostalgia past and the current cultural climate of this island nation. In a microcosm of seemingly everyday life, he displays a distillation of the complexities of multiracial existence.

"He points the magnifying glass on Singaporean identity across generations and race and translates it well on the big screen. This is a work that communicates and connects with the audience nationally, across Asia and out in the world." 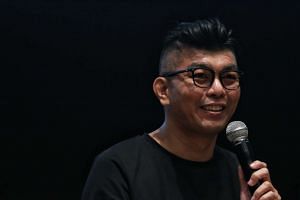 Asked how it felt to win an award for his work independent of the film omnibus, Tan told The Straits Times: "The seven shorts were all personal heartfelt letters from the directors to Singapore. And as we are all inter-connected in Bunga Sayang as well as 7 Letters, I would like to share this award with my fellow comrades."