SINGAPORE - Local actress Rebecca Lim announced on Instagram on Friday morning (Feb 12) that she is "retiring".

Alongside a picture of herself smiling as confetti flies around her, the 29-year-old star wrote on her account @limrebecca: "Hi everyone. I've decided to do something that will change my life. I have been thinking about it for a while now as I know it has to be done. 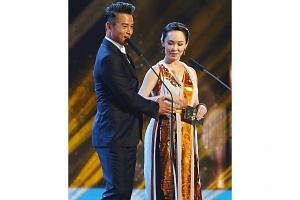 The news is surprising because the star is in her prime.

At the Star Awards last year, she won the coveted Best Actress award for her role as a geeky idol drama addict in Yes! We Can. At the previous awards show in 2014, she had won the Best Supporting Actress award for the blockbuster drama The Dream Makers.

Since 2012, she has also been named among the Top 10 Most Popular Female Artistes.

At the upcoming Star Awards to be held in April, she is nominated for Best Actress for her romantic comedy Sealed With A Kiss.

A versatile bilingual star, she is also an award-winning actress in Channel 5's English-language programmes. At the 2010 Asian Television Awards, she won Best Actress for her role as a rookie legal eagle in The Pupil.