NEW YORK (AFP) - Will American rapper DMX, who was rumoured to have spent his time in prison writing new songs, drop a new album now that he is free?

He was released last Friday from a West Virginia federal prison after serving a year behind bars for tax fraud, his lawyer said.

Entertainment news outlet TMZ also reported that he has offers to do a biopic.

The Internal Revenue Service (IRS) also ordered him to pay US$2.3 million in restitution.

Prosecutors said the star had dodged taxes by living on cash, without maintaining a bank account or filing required tax returns with the IRS.

He will be under supervised release for three years. 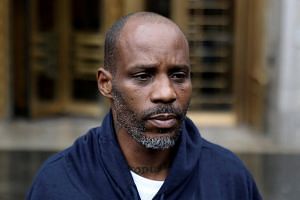 Rapper DMX sentenced to one year in prison for tax fraud, after his song played in courtroom

DMX, whose deep, gravelly voice and dark, often violent lyrics catapulted him to fame in the early 1990s, has a colourful criminal history.

The father of 15 has been arrested for a variety of offences over the years, including drug possession, reckless driving, animal cruelty and failing to pay child support.

Artistically, he is best known for his 2000 smash hit Party Up (Up In Here), in which he belittles other rappers.