But a few minutes into a new TV series on Mr Gates reveals a fascinating insight.

The Microsoft co-founder and philanthropist is asked what his worst fear is. It is not family tragedy or personal pain. "I don't want my brain to stop working," he said.

That formidable grey matter is fittingly the subject of Inside Bill's Brain: Decoding Bill Gates, a three-part documentary on Netflix from Academy Award-winning director Davis Guggenheim. It starts on Sept 20.

A portrait emerges of a visionary who gnaws on his eyeglasses' arms, downs Cokes and is relentlessly optimistic that technology can solve social ills.

He is also someone who reads manically - he will scrutinise the Minnesota state budget for fun - and who is a wicked opponent at cards.

While the series is largely sympathetic towards its subject, Guggenheim nevertheless presses Mr Gates on everything from the federal anti-trust case against Microsoft in the 1990s to his relationship with his mother.

The series gets a dash of action by having Guggenheim interview Mr Gates during hikes around rugged places. The two men are often filmed from behind. 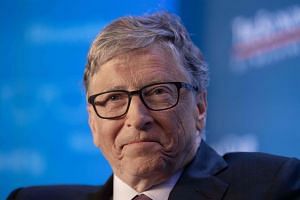 The Bill-Melinda Gates romance started with a rejection

For greater insight, Guggenheim interviewed Mr Gates' sisters, tycoon Warren Buffett and Mr Gates' wife, Melinda, who comes across as smart, funny and an occasional foil to her husband. The Gates' three children are shown but were not interviewed.

Each episode in the series introduces three huge global issues the Bill & Melinda Gates Foundation has tackled recently - safe sanitation technology, polio eradication and nuclear power - and then switches back in time to see how Mr Gates solved other complex issues in his life as a younger man.

After spending so much time with Mr Gates, Guggenheim said the popular perception of him as a cold, dispassionate thinker is not true. "The truth is... he is very passionate and emotional. But he puts those emotions to the side," he said.

"If you're solely led by your heart, you may not see the great solution standing in front of you and I think that's what Bill's superpower is."