BEIJING - Despite practising for hours, Singaporean singer Nathan Hartono did not get to perform the second part of his harmonica solo at the Sing! China finals on Friday (Oct 7).

"I was supposed to do beat box and another harmonica solo in the middle of the song," Hartono told The Straits Times about the slight hiccup that happened while he was performing the Nunchucks rap hit with his mentor Jay Chou.

"But the dancers took away my harmonica," he said over the phone after the contest.

"My heart broke into a million pieces as I watched the instrument move further and further away from me. I had practised for hours and hours in the hotel room," he added.

So he ended up just doing the beat box part only. Nonetheless, the performance was well-received and he garnered the second-highest votes after that round.

Hartono pointed out that each of the three songs that he sang had its own challenges. The first involved dance choreography and various different elements. The second - the Longest Movie ballad - had a key change that he found difficult.

He had a "lyrical problem" with the third number, which was a medley of Moonlight in the City and Woman Flower - songs by Singaporean singer Mavis Hee and Hong Kong legend Anita Mui.

"I had only two days to learn the lyrics of the song(s)," he said. 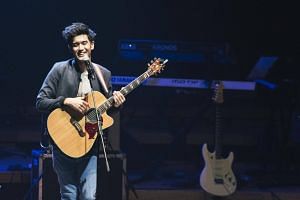 Win or not in Sing! China, Nathan Hartono has plans to develop career in China

The 25-year-old, who goes by his Chinese name Xiang Yang in the show, lost to Xinjiang native Jiang Dunhao in the final round. He described Jiang as a "great singer" who really understands what the Chinese audience like to hear.

"Till today, the first song that he sang in the contest still remain stuck in my head," he said.

Although he said he was still "in a bit of a daze" as "everything just went off very quickly", he was not at all disappointed with coming in second.

He urged fans and supporters in Singapore to be happy that a fellow countryman has come so far. "Thank you Singapore, and all of you for the support. It really kept me going," he said.

Given the ups and downs he had gone through being in a foreign country and foreign environment, the strong support had helped made his journey a "less solitary experience".