The story: After two hired killers Hornet (Jay Shih) and Mark (Na-dow) finish a job in Singapore, they return to Taiwan, where Hornet hope to retire. The final job of securing software known as "100K" while fighting off other killers seeking the same thing turns out to be a difficult one. Along the way, they meet the vapid Talia (Amber An), and her protector, Ira (Apple Chan).

For director and co-writer Jack Neo, Singapore's most commercially successful film-maker, this movie marks a milestone: This is his first major-budget action thriller and is also filmed mostly in Taiwan, with a pan-Asian cast.

What this Chinese New Year-timed bullet-strewn comedy is not, however, is a work with structure. In Neo style, what's on screen is a collage of scenes, driven by dialogue jokes built on single-gimmick characters.

Malaysian actor Gadrick Chin's Sha Bao thinks he is handsome and talented when he is clearly not, for example, and Taiwanese actress Lin Mei Shiu's assassin boss character mangles English when talking to her Filipino client. She fancies herself as sexually attractive when she is, like Chin's Sha Bao, clearly not, at least in the world of the movie. 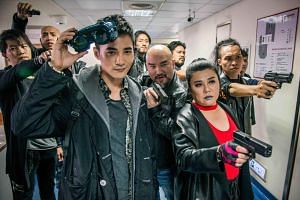 This is big-budget Neo, now able to feature fancy drone shots and computer-enhanced pyrotechnics, but the core of his style is there, in how the jokes are a throwback to television-grade cross-talk, or in freakish folk like Chin's Sha Bao.

It feels ungenerous in the moment, even though in the larger arc of the film - and one uses the word "arc" advisedly - Chin's character might, for example, be vindicated. To his credit, Chin is a fine actor whose performance elicits sympathy. His humanity shines through even as he is the grotesque butt of the joke.

The signature humour is now punctuated by extended gunfights and fistfights. These, like the dialogue or plot, feel lightweight and are louder and longer than necessary, but they are at least set in scenic Taiwanese tourist locales, like its outdoor markets.

This movie, if nothing else, serves as a nostalgic echo of the big, broad ensemble comedies, high in the goofiness factor, that the Hong Kong film factories used to make during the Chinese New Year period. They faded away as tastes changed and this movie reminds us why they vanished.