The story: It has been five years since the events of The Lego Movie. Emmet (voiced by Chris Pratt) and other former inhabitants of Bricksburg - the Lego city he saved from destruction in the first movie - are living in a post-apocalyptic wasteland named Apocalypseburg. They are under constant threat from alien invaders made out of Lego Duplo, the bigger Lego bricks for younger children.

Going into the cinema to watch The Lego Movie 2, the target audience of the film was immediately clear: the dozens of children who streamed in with their parents.

The sequel - set five years after 2014's The Lego Movie - had a tough act to follow.

The first movie, a box-office hit, was universally loved and acclaimed. It was also fresh and original, as it was the first film to feature the construction brick toys.

Since then, it has spawned into a successful franchise that includes the spin-offs, The Lego Batman Movie and The Lego Ninjago Movie, which were both released in 2017.

The sequel sees Chris Pratt, Elizabeth Banks, Alison Brie and Will Arnett reprising their roles, and welcome additions like Tiffany Haddish as an alien queen bent on marrying Batman (Arnett).

The film does its job of satisfying its audience base with exuberant, colourful graphics as well as fun and over-the-top pop songs.

But the story comes off as rather trite. The film is anchored on a sibling rivalry - the events of the Lego universe in the first movie are played out by Finn (Jadon Sand) on his father's (Will Ferrell) expansive Lego set, and in the sequel, his younger sister, Bianca (Brooklynn Prince), is now allowed to play with Lego. 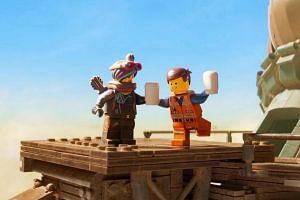 The Lego Movie 2 grows up

But the emotional pay-off is rather weak, with a predictable twist and cliched, simplistic portrayals of the siblings.

In the movie, boys are painted as grumpy and loving black, while girls love pink and glitter. Yes, this is a kids' movie but surely the characterisations can go a little deeper beyond stereotypes.

While I found the core story weak, as this is the first Lego film I've seen, I was rather delighted by the novelty of seeing Lego toys in live action on the big screen.

I have no doubt the film will entertain children by virtue of its visual richness, which I also enjoyed as an adult.

Lego characters from different universes - from Justice League superheroes to dinosaurs - appear in a range of different environments, from cities and suburbia to apocalyptic wastelands and alien planets.

But this is not purely a kids' movie. There are moments of self-awareness with references and jokes that only adults would get. I am pretty certain that primary school-aged children will not know British band Radiohead, a leading rock act in the 1990s who are referenced near the end of the film.

Do stay for the hilarious closing credit sequence, which features a six-minute song about, well, getting the audience to stay right to the end.