The story: The police are called in when a Chinese national, Wang (Liu Xiaoyi), vanishes from his work site. Detective Lok (Peter Yu) retraces Wang's steps and his eyes are opened to a twilight world inhabited only by migrant workers in Singapore: their dormitories, cyber cafes and their celebrations. He also finds that their overseers, who take sand from other countries to grow Singapore's coastline, are not telling him everything they know.

In this dreamlike detective story, a cop who cannot sleep searches for a man who cannot wake up from a nightmare. In the background, a woman from China yearns to be anywhere but here, while men from Bangladesh have made a space for themselves that is home away from home.

Singaporean film-maker Yeo Siew Hua tries to crack the puzzle that is Singapore in this ambitious, mostly-Mandarin film that grapples with issues of ethics and identity, all wrapped in a police procedural.

The philosophy graduate from the National University of Singapore likes the big questions: What is the meaning of home? For the sake of comfort and modernity, how much is too much in terms of human suffering? In a variation on the conundrum of the ship of Theseus, can a physical space composed of particles taken from other lands ever be said to belong to its new owners?

That intellectual remove gives the film an air of coolness, and at the cost of urgency and immediacy. And yes, characters do peer into the distance while musing about alienation and belonging. This reviewer cannot remember if smoke curled upwards from cigarettes held in their fingers while they spoke, but it would come as a surprise if it did not. 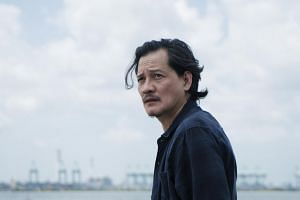 After walking away from Mediacorp in 2000, Peter Yu finally gets his movie break

This is Yeo's second feature after the experimental film In The House Of Straw (2009). Last year, A Land Imagined snagged the Golden Leopard prize at the Locarno Film Festival, and Best Film prize at the Asian Feature Film Competition section of the Singapore International Film Festival.

Yeo's investigator character Lok, played with a lovely hangdog expressiveness by Peter Yu, is cosmic detective, a man whose radar picks up signals others cannot sense, but which enable him to find his quarry. Chinese actress Luna Kwok is Mindy, a femme fatale of sorts whose observations spur Lok on his search.

The villains are the developers who create the straight lines that make up the Singapore coastline and they are - pardon the pun - remarkably concrete characters, in contrast to the goings-on in the rest of the film.

That tonal shift is jarring, but it is a small flaw in a bold work that seeks to unsettle - figuratively and literally - the ground beneath our feet.

A Land Imagined will screen at Cathay Cineplexes (Cineleisure Orchard, JEM, Parkway Parade and The Cathay). It will also screen at GV Vivocity and The Projector.