SINGAPORE - The owner of the motorcycle that was hit by television star Rui En's car has accepted her apology, said reports on Friday (April 15).

The actress said sorry for the accident in an interview with Lianhe Wanbao on Thursday. On Facebook, she posted an explanation of why she said "Do you know who I am?" when she emerged from her car after the incident.

She said she had actually told the motorcycle owner, Mr Bahrom Sarmiten: "Do you know who I am, I live upstairs and won't run." 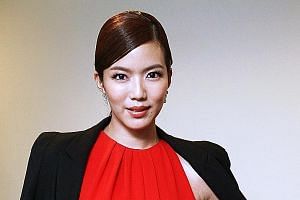 How will Rui En fare at Star Awards?

Has Rui En's popularity taken a hit after her accident?

He said he answered "No" when she asked whether she knew him, and did not hear the bit about her living upstairs and not running away. "Later, only when a resident told me, did I know she lives here," he said.

He also told Shin Min Daily News he wished her luck with the Star Awards, and hoped for her safety.

"I hope she will drive safely. After all, she must take her own safety into account."

He has heard from friends Rui En will attend the Star Awards on Sunday (April 17) and April 24, and he will watch the shows, he said. "Hope she stays beautiful and healthy."

Rui En is in the running for Best Actress at the April 24 show.