The story: After the escape of terrorist leader Solomon Lane (Sean Harris), the Mission: Impossible team is forced to work with CIA agent Walker (Henry Cavill) as they try to foil Lane's plot to detonate bombs in major cities. But top agent Ethan Hunt (Tom Cruise) finds that his loyalty to his friends keeps getting in the way of the mission.

Cruise creates vehicular mayhem in the streets of Paris and makes gravity-defying leaps across London's rooftops in just two of this movie's spectacular setpiece stunts.

Fan of the series have come to expect big action grounded in reality, not computer trickery, and they will be plenty happy to note that the sixth instalment offers a satisfying amount of top-grade smash-ups, on the ground and in the air.

And that is a good thing because it makes up for the disappointing lack of focus. Despite the story's use of a literal ticking time bomb, the sense of urgency that in previous films propelled the team from one job to another is absent.

The infamous Cruise ego - the one that sank his horror effort The Mummy (2017) by keeping focus on his blah character instead of the villain the movie was trying to introduce - ensures that he takes centre stage in almost every shot. But thankfully, the strong ensemble cast has enough of a presence to make up for the Cruise-overload. 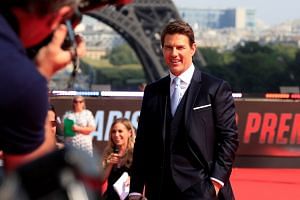 In Pictures: Premiere of Mission: Impossible - Fallout in London and Paris 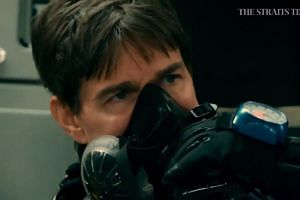 Otherwise, not much is new. The old team is back, namely Luther (Ving Rhames, providing surveillance and wise counsel) and Benji (Simon Pegg, giving IT support and comic relief). MI6 agent Ilsa (Rebecca Ferguson), added in the previous film (Mission:Impossible - Rogue Nation, 2015), looks to be a permanent fixture, with her character designed to give Hunt's ex-wife Julia (Michelle Monaghan) a run for her money as his romantic interest.

As always, there is the frenemy factor, the character who appears to be an ally but at the film's climax will show his true colours. This is provided by Cavill, playing a tag-along CIA agent sent to keep Hunt and team on the straight and narrow.

The plot, as usual, strains to place Hunt in as many scenic spots as possible so that he can parkour, punch or pole-vault through them. Paris is where a thrilling and intricately coordinated car chase involving dozens of vehicles happens, and is the midpoint highlight of the movie.

Director Christopher McQuarrie, who helmed the previous chapter, comes back. He is blessed with a deliberately unflashy style that lets the action speak for itself. In a time of pointlessly swoopy camera moves and seizure-inducing edits, his plain approach is a welcome palate cleanser.