Can't Be Tamed singer Miley Cyrus will not be celebrating at year-end her first-year anniversary with Liam Hemsworth.

Over the weekend, her representative said the pair are going separate ways after they married in December 2018.

The wedding came after they had an on-again, off-again relationship since 2009 when they first met.

People magazine quoted the representative as saying: "Ever-evolving, changing as partners and individuals, they have decided this is what's best while they both focus on themselves and careers.

"They still remain dedicated parents to all their animals they share while lovingly taking this time apart."

Before the announcement came, sharp-eyed fans raised the red flag when Cyrus, 26, skipped wearing her wedding ring when she posted a photo of herself on Instagram.

The singer previously told Vanity Fair magazine that she does not hold old-fashioned beliefs about marriage.

"The reason that people get married sometimes can be old-fashioned, but I think the reason we got married isn't old-fashioned - I actually think it's kind of New Age. 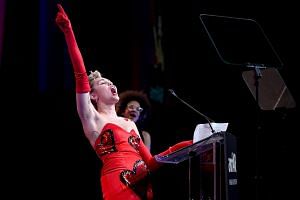 "A big part of my pride and my identity is being a queer person.

"What I preach is: People fall in love with people, not gender, not looks, not whatever. What I'm in love with exists on almost a spiritual level. It has nothing to do with sexuality.

"Relationships and partnerships in a new generation - I don't think they have so much to do with sexuality or gender."

"Sex is actually a small part, and gender is a very small, almost irrelevant part of relationships," added Cyrus who has revealed that she is attracted to women.

While she said then that marriage was not crucial in cementing her bonds with Hemsworth, 29, she admitted that she was looking for an anchor during a turbulent period that saw her Malibu home - which she shared with Hemsworth - destroyed in a fire.

Cyrus may have moved on to another person in her pursuit of happiness.

They were vacationing on a boat, with Cyrus posting a video on Instagram about her holiday and captioning it: "Rock the boat."

But given that she and Hemsworth have sailed through both calm and stormy weather since 2009, some pundits are not ruling out a possibility of Cyrus changing course yet again - and docking with the actor.