LONDON (REUTERS) - The Old Vic theatre in London said on Thursday (Nov 16) it had received 20 separate allegations of inappropriate conduct by Kevin Spacey from 20 men who came into contact with him at the theatre, or in connection with it, between 1995 and 2013.

The theatre was reporting on the findings of an investigation it launched on Oct 31.

Richard Miskella, a lawyer from the firm Lewis Silkin who conducted the investigation on behalf of the Old Vic, said that it had encouraged 14 of the men to talk to the police because of the nature of the allegations.

He did not say whether any of them had done so.

Mexican actor Roberto Cavazos alleged two weeks ago that Spacey had behaved inappropriately towards him when both were working at the Old Vic. It was not clear whether Cavazos was among the 20 men identified in the Lewis Silkin investigation.

Reuters was unable to independently confirm any of the allegations. 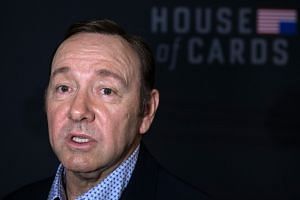 A timeline of the Kevin Spacey scandal: Oscar winner has been accused by actors, barmen and now a mother

Spacey has made no public comment about the allegation from Cavazos or about any alleged misconduct related to the Old Vic, where he was artistic director from 2004 to 2015.

His Los Angeles-based lawyer could not be reached by telephone and did not immediately respond to a request for comment from Reuters.

The Old Vic said it had asked Spacey to participate in its investigation but had received no response from him. It said it was not able to say whether the allegations were true or not.

Spacey is one of several prominent names in entertainment to face allegations of sexual misconduct following complaints by multiple women against Hollywood producer Harvey Weinstein.

Spacey first became embroiled in the wider scandal when actor Anthony Rapp accused him on Oct 29 of trying to seduce him in 1986, when Rapp was 14 and Spacey was 26.

Spacey said he did not remember the incident but apologised to Rapp, saying that if it happened it would have been "deeply inappropriate drunken behaviour".

In the most recent public statement from Spacey's representatives on Nov 2, they said that he was "taking the time necessary to seek evaluation and treatment", without giving further details.

Miskella said the alleged incidents relating to the Old Vic ranged from behaviour that made people feel uncomfortable to sexually inappropriate behaviour. He said the allegations had come from 16 former members of staff and four others.

Miskella gave no names or details about the allegations because those coming forward had done so with the promise of confidentiality.

More than 50 women have said that Weinstein sexually harassed or assaulted them over the past three decades and the Hollywood producer has been expelled from the Academy of Motion Picture Arts and Sciences.

Police in New York, Los Angeles, Beverly Hills and London have said they are investigating allegations of sexual assault or rape by Weinstein. Weinstein has denied having non-consensual sex with anyone.

Reuters has not been able to independently verify allegations made against Spacey or Weinstein.