I Hear The Sound Of Dawn, comprising some songs that have been performed before but never collected in an album, will be launched on Wednesday (Oct 12).

The 52-year-old veteran was a prolific songwriter in the 1980s and 1990s, during the heyday of the xinyao, or Singaporean Chinese folk pop music,  movement.

After the 1990s, he has continued to write songs for other singers while focusing on his work as an academic. An adjunct associate professor at Nanyang Technological University's Chinese division, he has said he considers himself a "man of letters who writes songs". 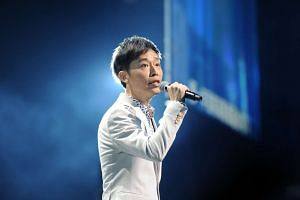 He won a Cultural Medallion for music in 2010.

His songs tend to have diverse themes beyond those of love and break-ups often heard in pop songs, and many of his folksy originals are now considered classics.

There's a song for every stage of life in Liang's oeuvre:

The son of a journalist and an acupuncturist, Liang wrote this first song when he was 16.

Another song from the 1980s, this was included as one of Singapore's best-loved songs at the Sing50 mega concert.

It's among a series of catchy songs that capture life's travails and joys that he has written, such as Too Much (太多太多), and Old Clothes Are Better Than New (新衣哪有旧衣好).

3. Eve Of The History Exam (历史考试前夕)

Witty lyrics that draw from Chinese history or literature is one of the hallmarks of Liang songs.

Liang updated the lyrics in 2012, using the song to pay tribute to xinyao pioneers in the Unofficial History Of Xinyao (新谣历史外传). The song can be found in the new album.

The Hwa Chong Junior College alumnus wrote many songs about friendship and camaraderie when he was at school.

This xinyao anthem topped the list of the top xinyao songs in a 2003 poll by the Composers and Authors Society of Singapore.

Written in 1990, when Singapore was celebrating its 25 years of independence, the lyrics trace the nation's progress.

He said of the song then: "In the past, because I was young, I always wrote about how different I was from others. But now, I want to be part of the masses and use my life story to show changes in our society."

At a concert last year, he performed an updated version Singapore Pie 2.0 which took on MRT train breakdowns and rising COE prices.

This is one of the memorable songs in December Rains (雨季) - a musical about the students' movements in the 1950s.

Another musical which features his songs is If There're Seasons (天冷就回来).

7. Catch The Sunrise With Me (陪我看日出)

This 2005 hit by Singapore singer Joi Chua won awards for its heartwarming lyrics. Liang has also written hits for singers such as Wen Zhang (Love And Negotiation, 情商), Jacky Cheung (She Came To My Concert，她来听我的演唱会), Andy Lau (Every Time I Wake，每次醒来) and Stefanie Sun (Simple Love，简爱), to list a few.