SINGAPORE - Korean TV drama fans who would like to see stars Song Joong Ki and Song Hye Kyo re-create their sizzling chemistry in last year's hit series Descendants Of The Sun will have to just watch the show again.

The chances of an onscreen reunion for them are slim since they will be married soon and he thinks it would be tricky to mix their work with their personal lives.

"Working with Song Hye Kyo in the future, I have to give a little more thought. It may be challenging because work is work. It may be a little tough to work on the same production," he said, speaking through a translator at a press event here on Tuesday (Aug 8).

Their wedding will take place at glitzy hotel The Shilla Seoul on Oct 31, Yonhap reported on Tuesday, quoting a source from Blossom Entertainment.

Ahead of the wedding, Song visited Singapore to promote his new wartime movie The Battleship Island.

At the press conference at Marina Bay Sands, Song was joined by director Ryoo Seung Wan, and his co-stars Hwang Jung Min and So Ji Sub. The trio were later greeted by around 5, 000 people at a public meet and greet at Suntec City.

The Battleship Island, a highly anticipated World War II drama, is Song's first production after rocketing to superstardom with Descendants Of The Sun, where his army captain character romances a beautiful doctor (Song Hye Kyo).

In the new movie, Song plays yet another heroic soldier.

He said: "If you count the number of years - I served national service in Korea, as well as played the role of a solider in Descendants Of The Sun and The Battleship Island - I've been living the life of a solider for about five years now.

"It has become something natural to me. I had short hair after serving national service, so I could comfortably immerse myself into the role."

Based on historical accounts, the thriller delves into the tragic plight of the captive labourers toiling away in a coal mine.

The inspiration to make the blockbuster - which has a star-studded cast and was produced on a massive budget of 22 billion won - was sparked when the director saw a photograph of the island in 2013.

Ryoo, 43, said: "The image was so powerful. It was so overwhelming. when I found out the background history of the island. I was really moved to bring the story to the public."

Song said one of the challenges he faced in playing one of the malnourished labourers was having to lose weight, and the most memorable scene to film for him was a scene where the workers attempt to escape the island. 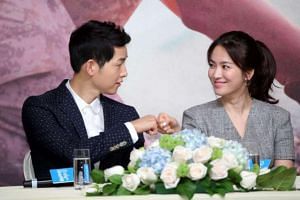 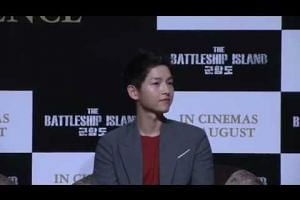 "It was not only because of the fast images and the cinematography, but also because of... the suffering of the captive labourers," he explained.

Out of the three actors, who would be able to survive such harsh conditions and make it out alive?

Actor So, 39, chose his younger co-star Song, saying: "Song Joong Ki probably has the best survival skills. He recently served his national service, so the memories of skills and training are fresh in his mind.

Hwang, 46, chimed in: "For the rest of us, any big, intense movement would cause pain."

The Battleship Island opens in cinemas on Aug 17.