K-pop star Goo Hara is back on her feet.

Posting a photo of herself on Instagram, she also penned her thanks to fans for their concern over her recent hospitalisation.

The former member of South Korean girl group Kara posted messages that dwelled on issues of betrayal and self-doubt before she was found unconscious in her home late last month.

The 28-year-old was in the news before that over her claim that a boyfriend assaulted and blackmailed her.

But after she told fans she was recovering, a more-combative Goo posted again on Monday (June 17), going after naysayers who spread rumours about her.

"From now on, I will be acting against malicious commenters. Where are those kind words that we can use to comfort one another while hurting?

"I'm going to try hard to be positive and recover so I hope you all try too. 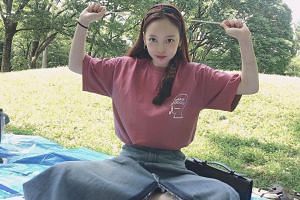 "Public celebrities have to be careful about every aspect of their private lives and they have pain that they can't even tell their friends and family.

"You can freely express yourselves, but can't you think about what type of person you are before making malicious comments again?"