Japanese pop star Ayumi Hamasaki is going completely deaf, she said on her blog Team Ayu on Saturday (May 20).

Hamasaki, who is the best-selling Japanese solo artist of all time, has been deaf in her left ear since 2008.

But her right ear has now begun to weaken, the 38-year-old said. She was nauseous and had vertigo just before this year's concert tour.

"I was told after various hearing tests that my right ear (which has been working overtime to compensate for the deafness of my left ear) is quickly weakening," she wrote.

"I was experiencing crippling dizziness. I was unable to walk in a straight line, and was often vomiting in the restroom while at the rehearsal studio." 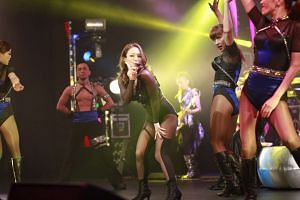 Is being a pop star bad for your ears? Ayumi Hamasaki and 5 other musicians with hearing damage

The prolific singer and performer said she felt lost after the revelation.

"I remember wondering how would I as a singer be able to cope with two useless ears. I was in the dark," she said.

Hamasaki's ear condition stemmed from a cold that she caught during her 2000 Act I concert tour.

She caught a cold and a ear infection, but continued touring after a few days in hospital.

Doctors told her to ease her exposure to loud noises, but she did not cancel or postpone any tour dates until much later. She also continued to work at a frenetic pace in the years after.

By 2008, she was deaf in her left ear. The queen of J-pop was thought to have tinnitus, a ringing in the ear that can be caused by constant exposure to sound.

Even now, she vows to continue performing.

"The stage is where I belong. It's the only place I really, truly exist. I don't know anything else," she wrote, according to Japanese entertainment sites.