SINGAPORE - The Singapore Islamic Scholars and Religious Teachers Association (Pergas) has issued religious guidelines on black metal, a subgenre of music that has been thrust into the spotlight after Swedish black metal band Watain was banned from performing here.

In a media release dated March 22, it stated that elements of black metal are "clearly in opposition to Islamic teachings" and that such music may lead to the glorification of Syaitan, or the devil, and "to the level of worshipping him as God".

The Infocomm Media Development Authority (IMDA) had initially given the Watain show an R18 rating, with strict requirements that included the removal of songs which were deemed religiously offensive. The concert was supposed to take place on March 7 at EBX Live Space and was expected to pull in 150 to 200 fans.

But it was cancelled altogether after the Ministry of Home Affairs raised concerns about the band's history of denigrating religions and promoting violence. Minister for Home Affairs and Law K. Shanmugam pointed out that the band's lyrics were highly offensive to Christians.

Pergas' statement states that music that praises and glorifies the devil is prohibited in Islam, and that all activities that relate to devil-worshipping is forbidden according to Islamic law. 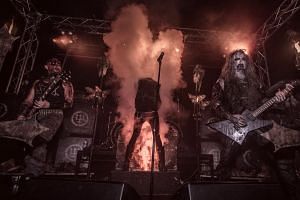 Listening to black metal is like 'watching a horror movie'

"Although some black metal fans enjoy the genre and its music merely for the sake of entertainment with no intention whatsoever in glorifying Syaitan or to insult any religion, over-obsession with such music may gradually have an insidious effect on one's thinking and emotions.

"In fact, it may result in the development of a careless attitude and feelings of apathy with regard to sensitivities towards religions that will indirectly lead to unease and disruption among members of a multiracial and multi-religious society."

In its release, Pergas urged the Muslim community to "exercise more care and be more sensitive in their choice of entertainment".

Pergas' chief executive officer, Ustaz Mohammad Yusri Yubhi Md Yusof, told The Straits Times that the association decided to put out the guidelines as a form of religious advisory to encourage Muslims to be cautious in their choice of entertainment.

"As a Muslim scholar association, it is our duty to provide religious leadership to the Muslim community when the need arises. Hence, these guidelines aim to address the issue of black metal or any activity that is anti-religious or related to glorifying and worshipping Satan."

Pasir Ris-Punggol GRC MP Zainal Sapari said that the advisory gives an Islamic perspective from learned Islamic scholars in Pergas and can help Muslims here make an informed judgment on their choice of music.

He added: "At the end of the day, it is still up to individual choice."

On March 21, IMDA said that it was looking into compensating Ravage Records, the organiser of Watain's concert.

In response to queries from ST, its spokesman said: "IMDA has been engaging Ravage Records on the reimbursement arising from the cancellation of the concert. IMDA is currently reviewing Ravage Records' claim and will reach a decision soon."

On its Facebook page, Ravage Records said it is working on reimbursing ticket buyers, who paid between $70 and $166. It added that "everything has been paid for, from the flights to accommodation, to transportation, equipment and venue rental, and even band fees". It added that the company is waiting "for the authorities' answer for compensation".

The controversy over the Watain show has not stopped the music company, which also operates a music store in Golden Mile Tower, from putting on more shows. It recently announced a concert by Cult Of Fire, a metal band from the Czech Republic, at EBX Live Space on June 1.