SINGAPORE - Despite threatening clouds and a downpour earlier, Ghostbusters fans thronged the Marina Bay Sands event plaza on Sunday evening to get up close with Hollywood star Melissa McCarthy and director Paul Feig. The two also witnessed a successful Guinness World Record attempt that put Singapore in the books for the largest gathering of people dressed as ghosts at a single venue.

McCarthy, 45, in Singapore for the first time, told The Straits Times that despite the humidity, she managed to shop and dine after arriving on Saturday.

"I had white pepper crab, it literally blew my mind," she said. "Everything from the hawker side, I absolutely loved, and I'm ready to go back," she added. 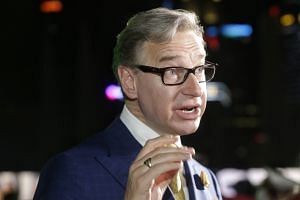 The Oscar-nominated comedienne, who stars alongside Kristen Wiig, Leslie Jones and Kate McKinnon in the all-female remake of the 1984 supernatural horror comedy, spent plenty of time on the red carpet chatting and taking selfies with fans who had come dressed as ghosts for the world record attempt.

An official Guinness World Records adjudicator was on site to verify the record attempt, which saw 263 individuals dressed in all-white onesies and donning masks depicting the film's "no ghost" symbol.

One of them was Mr Raymond Xperia Chan, 38, who was in the white costume for almost nine hours. But he did not mind the discomfort since he got to be a part of the world record and to meet McCarthy for a short while. "It's a good feeling, I probably won't ever get to do this again," the Uber driver added.

Meanwhile, the film's director, Feig, who is also responsible for Bridesmaids (2011) and Spy (2015), said he felt like a new generation needed their own Ghostbusters. "I loved the original Ghosbusters and I'm such a huge fan but I feel like it's time (for a reboot)," he said. "I liked the idea of taking the franchise and giving it a fresh start."

While there been criticism online - mainly centred on the choice to remake a 30-year-old film with an all-female cast - some fans think the film should not be judged too soon.

One of them was Ms Mei Tryadi, a 29-year-old research assistant, who said: "Some hardcore fans who love the original want to make comparisons, but I think people should give the remake a chance before they make judgements about it."

The film opens in Singapore on July 14.

Sunday's event was part of a series hosted by Sony Pictures to highlight upcoming releases, including an adaptation of the Dan Brown novel Inferno starring Tom Hanks, as well as an American Western, The Magnificent Seven, helmed by director Antoine Fuqua.