SEOUL - The husband of South Korean TV actress Han Ji-seong, 28, who died on Monday (May 6), said he did not see her drinking that day.

According to media channel TV report, he is a lawyer, and he told the police: "I had several drinks with peers at Yeongjongdo."

Yeongjongdo is an island off the west coast of Incheon city, near Seoul.

Han, 28, was hit by a taxi and a sports utility vehicle when she went to the back of her Mercedes-Benz car after stopping in the middle lane of an expressway near Incheon International Airport.

The husband said he wanted to take a toilet break in the woods next to the road.

He did not know why his wife did not pull over on the road shoulder for safety reasons.

Other reports said Han walked unsteadily when she got out of the car and appeared to be vomiting, fuelling talk that she was intoxicated or had taken drugs. 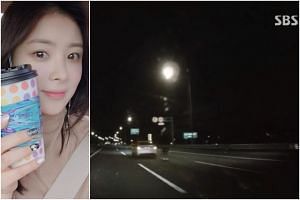 South Korea TV actress, 28, dies after being hit by two cars in middle of expressway

The situation got murkier when dashcam footage from another vehicle seemed to contradict the husband's claim that he found out about the accident only after he got back to the car.

The video shows that Han was out of the car before he dashed across the road and that the accident occurred 10 seconds after he reached the guard rail.

Pending the completion of police inquiries and an autopsy report, netizens have floated theories over why Han would stop in the middle of a busy road, though she turned on the emergency lights.

Apart from talk that the couple - who got married just two months ago - could have quarrelled in the car, some think that Han and her husband were so drunk that they did not realise they had put themselves in a dangerous situation, stopping in the middle of the road and dashing across it.