SINGAPORE - Rebooting a classic and beloved film is always a risky move. But Hong Kong actor-turned-director Stephen Chow was never one to shy away from a challenge.

The 56-year-old, who starred in and directed 1999's King Of Comedy about an aspiring actor's trials and tribulations on the road to stardom, chose to feature a female protagonist in a similar role for The New King Of Comedy.

The film opened here on Tuesday (Feb 5) - the first day of the Chinese New Year.

Chow says of the new movie: "It's set in a different era and the lead character is now a woman. I find that the strength of a woman is more restrained but powerful."

Speaking about E over an email interview, he says: "She has a lot of experience being an extra and playing minor roles, but she has never given up on her dream of being an actress. That fits the story of the character and of course, her performance was very good. I think I picked the right actress for this part."

Starring alongside E is Chinese actor Wang Baoqiang, who plays a washed up movie star. 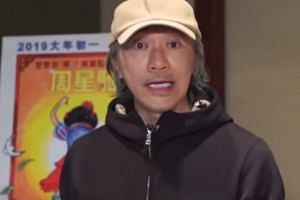 Chow says he picked the 34-year-old Wang because his experiences encompass the whole spectrum of stardom.

"He's someone who's a huge star but he also began his career playing extras. I can't think of anyone else."

Chow's last directorial effort - The Mermaid (2016) - was a record smash hit. It made more than US$550m at the box office and became one of China's biggest blockbusters, with a sequel on the way.

But Chow says he did not set out to replicate The Mermaid's success with his new film.

He says: "I didn't really think about how it'll do at the box office. I just want to do what I want to do. I hope audiences identify with this film and understand the spirit of it. That's more important to me.

"I want people to know that you should always work hard because opportunities are on the horizon."

The film was reportedly not a breeze to make, however, and was in development for three years.

Chow, who wrote the script, says: "The most difficult part was developing the script. This film doesn't have any fancy graphics or effects so it asks more of the script and the way it handles characters' relationships and their emotions.

"Moreover, because there was a previous well-loved film in King Of Comedy, we have to take more care in preparing the script."

And one call-back to the original for die-hard fans?

Cecilia Cheung, who made her film debut opposite Chow in the original King Of Comedy and promptly shot to fame at 19, lends her voice to one of the characters in the new film.

Cheung, now 38, played a young hostess and Chow's love interest in the 1999 film.

"I really wanted her to star in it too, but she was pregnant and she couldn't act, so I could only use her voice," says Chow.

Cheung gave birth to a son - her third child - in November last year, without revealing the identity of the father.

But while his co-stars and peers still continue to act and appear onscreen, Chow has gone behind the scenes. His last major role was in 2008's CJ7, which he also directed.

Says Chow: "If there's a very good story or a good role I might consider acting again. But it won't be easy to get me to do so."