SINGAPORE - No matter how awkward the situation gets between feuding actresses Hong Huifang and Pan Lingling, broadcaster Mediacorp said that casting decisions for future drama series will not be affected.

In a statement sent to The Straits Times, a Mediacorp spokesman said: "This is a personal matter. Personal relationships are not taken into (account for) casting decisions."

In fact, Hong and Pan have already filmed a scene together after they had a falling out.

According to Lianhe Zaobao, they had to shoot a scene for the ongoing Channel 8 drama Reach For The Skies, a day after news of their feud broke on Sunday (July 22).

In the scene, Hong's character shares details of her difficult past with Pan's character and seeks her help.

The producer of the series, Leong Lye Lin, told the Chinese daily that the two were "very professional" on set.

She said: "Both of them are very professional actresses. Besides, the feud is a personal matter and has nothing to do with work. Both of them did their jobs and did not give a hard time to the production crew."

Asked if the script would have to be altered to accommodate the pair for future episodes, Ms Leong said: "There is no need for that. I think they can separate work and personal issues very clearly." 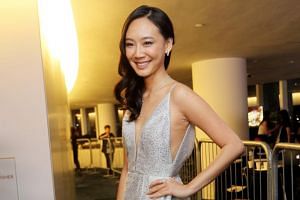 When Zaobao reached out to Pan about the shoot, she replied in a text message: "Putting aside personal matters and getting into the heads of our characters is our responsibility. To perform well in the drama is also our responsibility."

The Straits Times approached Hong at the Michelin gala dinner on Wednesday night, but she declined to say more on the spat. "I don't want to comment on this any further because otherwise it will never end," she said.

Hong had severed her long-time friendship with Pan via a lengthy text message, which was sent to around 50 of their mutual friends, including actors Chen Xiuhuan and Chen Hanwei.

The two actresses have known each other for more than 20 years and have worked together as early as 1988 in the drama, The Golden Quest.

Unhappiness had apparently been brewing between the two for a while, but the last straw was when Pan allegedly made some comments about Hong's children with fellow actor Zheng Geping - daughter Tay Ying, 22, and son Calvert Tay, 18 - at a gathering about a month ago.