SINGAPORE - Fans of science-fiction series Westworld take note - some of your favourite characters might well be showing up in Singapore.

A HBO spokesman confirmed on Thursday (June 13): "Filming locations for the third season of the HBO drama series Westworld (2016 to present) will include Singapore."

While no other details have been revealed, hints have been dropped online.

A trailer for the upcoming season, which reportedly began filming in March and is expected to air next year, has one quick scene featuring what seems to be Singapore.

Midway through the trailer, an aircraft hovers and iconic structures from Singapore's skyline, including the Maybank building, can be seen in the background.

Local talent agency Fly Entertainment also put out a casting call on June 1 for what is referred to only as a HBO production. 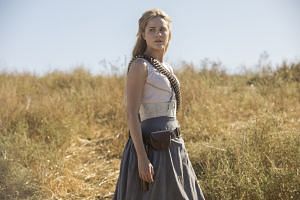 Westworld leaves a trail of breadcrumbs

According to the open call, filming will take place from July 1 to 9 this year and there will be scenes with lead actors taking place.

Westworld, a series about human-looking androids that begin to gain sentience, features actors such as Evan Rachel Wood, Thandie Newton and James Marsden.

The series, which has been nominated for a string of Emmys, including for Outstanding Drama Series in 2017 and last year, has largely been set inside theme parks where androids fulfil the desires of human patrons.

The next season, however, will reportedly turn its focus to the real world.