According to LAMC, the concert is one of the biggest rock shows held in Singapore, with close to 50,000 tickets sold.

But music fans have taken to LAMC's Facebook account to slam the concert promoter for its poor organisation of the event.

The main grouse appears to be about a cashless payment system for buying food and drinks at the event. 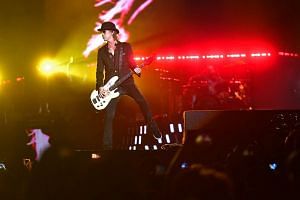 Audience members said they had bought credits in advance, which were stored in an RFID tag, but they could not use them as the food and drinks ran out.

"LAMC would like to add that we are apologetic to attendees who were unable to spend their full RFID credits,"it wrote.

"Our wish is for our audience to be fulfilled; we therefore pledge to refund the unspent RFID credits. We are working hard with our teams to formulate a refund process."

But the complaints continued to come.

A Facebook user known as Tim Weiss wrote in a comment that was liked more than 100 times: "Your organisation of this show was an absolute disgrace. It was completely amateur and was a complete disappointment to thousands of people, many whom travelled from abroad. I will never attend another event promoted by LAMC. Absolutely horrible."

"I had to miss parts of the concert just for all this lining up," wrote Melinda Wong, who said she queued for two hours.

Another angry commenter said that she queued two hours for beer only to find out that her RFID tag was not topped up, although she paid concert staff $50.

People also asked the organisers why tickets, which most paid hundreds for, were not checked at entry.

" I did not show anyone my ticket. This is incredible. Anyone could have gone in for free, they just let the people in..." wrote Alex Ballesteros in a message to The Straits Times.

He queued for 80 minutes for food and drink, only to be told that both had run out, he said.

The shuttle bus services, which concert-goers had to pay for, were inadequate and the wait was about two hours, they said.

Another concert-goer, who only wanted to be known as Ms Lee, said the traffic jam was also much longer than expected, with cars backed up till Loyang Avenue.

The jam was so long that she saw people get out of their cars to pee by the road, Ms Lee, 30, said.

"I know traffic would be bad near the carpark but it piled back so far. (That was) just unexpected," she said.

VIP ticket holders also complained about the location and size of the VIP pen.