The Taiwan-born Canadian was 35.

Gao was born to a Taiwanese father and a Malaysian mother of Peranakan descent. His mother, who is from Penang, was once a beauty queen in Malaysia. His father reportedly used to be a general manager for tyre manufacturer Michelin in Taiwan.

He was the youngest of three boys. His second brother, Charles, 38, is also a model and actor.

The family uprooted and immigrated to Canada from Taiwan in 1995. He told American news outlet NextShark that he experienced racism when he first moved to North Vancouver, where there were not many Asians, and he tried to make friends by offering candy he brought from Asia to his peers.

The 1.93m-tall Gao, whose real name is Tsao Chih-hsiang, originally wanted to play basketball professionally. He began playing the sport in elementary school and said in interviews that he played for two years for his college team. He had attended Capilano University in Canada.

While Gao did not reveal why, his hoop dreams did not pan out. He became a model instead, going back to his birthplace of Taiwan and was quickly noticed thanks to his good looks and towering stature. He became one of the members of the so-called Fashion F4 in 2008.

F4 is a fictional clique in the Japanese romantic manga series Boys Over Flowers, comprising four good-looking men from rich families and also the name of a Taiwanese boy band.

The Fashion F4 consisted of Gao as well as Taiwanese models Sphinx Ting, Lan Chun-tien and Victor Chen - who are all from well-to-do families. They appeared in a fashion shoot together in 2008 and also released a book in 2009. 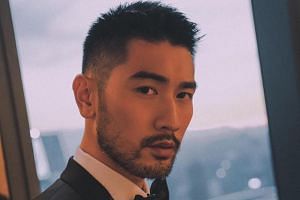 His acting career also took off in Taiwan. After a series of supporting roles in idol dramas like The Magicians Of Love (2006), he became a leading man in 2010 in the drama Volleyball Lover.

He made his Hollywood debut in 2013 in The Mortal Instruments: City Of Bones as warlock Magnus Bane.

In China, he is best remembered for his role as Lichuan in Remembering Lichuan (2016), a television adaptation of a Chinese romance novel. The drama was extremely well-received, with a rating of 8.6 out of 10 on review site Douban.

He was nicknamed the "nation's husband" by Chinese netizens for his charming portrayal of a handicapped architect.

In real life, Gao kept a low profile when it came to his private life. He was once linked to singer Dominique Choy, who is now married to model-actor Sunny Wang.

Most recently, he has been linked to 23-year-old Bella Su. Not much is known about the influencer, who has over 35,000 followers on Instagram. Media reports say Su comes from a rich family and that the two met through former basketball star James Mao.

It was rumoured that the two were engaged and that they were previously spotted together at a mutual friend's wedding.