Lin died a day after Dec 13, which is her and her husband’s birthday as well as their wedding anniversary. The couple have three children.

The former actress was diagnosed with multiple system atrophy in 2010 and had started  using a wheelchair in 2014, she told Shin Min Daily News in an interview a year later.

Lin was a familiar face in Channel 8 drama serials in the 1980s, memorably acting as a detective along the late Huang, who died after a six-month battle with lymphoma in 2013 at age 60, in drama serial CID 83 (1983).

She was one of the main characters along with Chen and Li Wenhai in The Young Heroes (1985), a show set in Republican China featuring warlords and soldiers.

While she gradually faded from television screens after the 1980s, she acted in 2006 drama serial Family Matters, a legal drama starring Ivy Lee and Thomas Ong.

Lin also appeared at the Star Awards in 2007, alongside other former 1980s television actresses such as Ye Sumei and Fu Shuiyu. 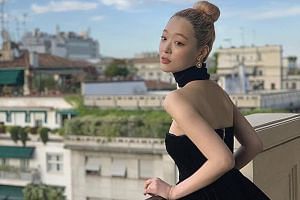 Gone but not forgotten: Remembering 10 stars who died in 2019

Li, who was among the artists at Lin’s wake on Sunday along with Xiang Yun and Edmund Chen, told Shin Min that Lin was “an icy beauty”, adding that she did not smile or say much inititally but became warm after one got to know her better.

He added that she was a sincere person with a professional attitude.

Actor Chen Shucheng, who acted with Lin in the TV drama Pursuit (1984), told Wanbao that she was a very good actor who had a good command of Mandarin.

Lin’s death follows that of local television actor Bai Yan, who died at the age of 100 in August this year.