BEIJING - F4 member Ken Chu announced his marriage to Chinese actress Han Wenwen on Tuesday (April 12) by posting a picture of their marriage certificates in front of a sign saying "2016-4-12".

"The dust has settled... The story has only just begun," wrote the Taiwanese actor, who shot to fame as a member of Taiwanese boyband F4 and a star of the hit 2001 Taiwanese drama Meteor Garden.

He also posted a photo of himself with Han.

On Monday, Chu, 37, had proposed to Han with a bunch of flowers in front of guests at her 34th birthday party. 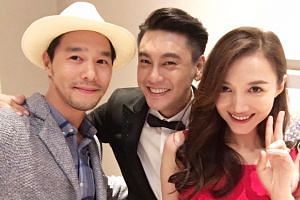 He also serenaded Han with the theme song, Can't Help Falling In Love With You, from Meteor Garden. She said she would reply in song, and strummed a guitar to sing, I Do.

She later posted pictures of the party, including a photo of what looks like a diamond, heart-shaped ring.

They were first linked last June after they were photographed holding hands in a mall.

With the latest marriage, Jerry Yen will be the only bachelor left in F4 as Van Ness Wu and Vic Chou have both wed.