HONG KONG - Was model Shu Pei Qin ever invited to the fashion reality show Hey Muse and why did her boyfriend Edison Chen pick on supermodel Chiling Lin, a star of the show?

After Chen, 35, attacked Lin, 41, on Weibo last Wednesday (July 27), producers initially denied rumours that Qin, 25, had been considered for the show. They later confirmed that she had been on their list of candidates, but said Lin was not responsible for Qin being dropped from consideration. They said Qin's relationship with bad boy Chen had affected her image, reported Apple Daily.

On Sunday (July 31), the plot thickened. Apple Daily released transcripts of what it said were recordings of Qin being told Lin's camp did not want her on the show. 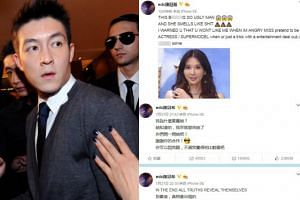 Edison Chen attacks Chiling Lin on Weibo, says: She knows why, I warned her

In one recording, a man was quoted as saying: "To put it bluntly, Chiling Lin's side doesn't want you to join the show."

In another, a man was said to have told Qin: "Chiling Lin's side has objections to you joining the show. We're working on them ideologically."

On Weibo, Qin said producers offered her a role, but withdrew it after she turned down jobs to make time for it.