Action star Donnie Yen announced on Friday (Sept 30) that he will be making a fourth Ip Man movie, despite saying earlier that Ip Man 3 may be his last gongfu movie.

The Hong Kong actor and director posted on Facebook: "I want to share this very excit(ing) news with you all, my good friend Wilson Yip, who had directed all of my last three Ipman series, tonight, we have decided to reunite and continue to make our next project together, Ipman4! Yes I-P-M-A-N part 4!"

No other details were provided by Yen.

The first Ip Man (2008) movie raised Yen's profile substantially, although he was already a well-known action star by then.

Two sequels to the biopic about Ip Man, a gongfu legend who was teacher to Bruce Lee, followed in 2010 and 2015. 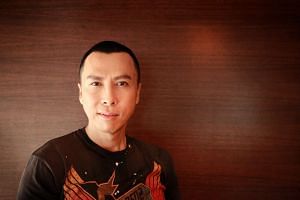 But the 53-year-old said, as Ip Man 3 was launched, that he wanted to step down from the franchise at a press conference in Shanghai last March (2015).

He also said at a press conference in Singapore in August that he wanted to go beyond the role he is best known for.

"I am very fortunate to have played a character majority of the audience has embraced. But I wanted to continue to grow as an artist and did not want to be stuck only playing Ip Man."

However, he is not the only star to have prematurely announced his intent to retire. Jet Li and Jackie Chan have done the same in the past.