Korean actor Song Joong Ki has been setting female hearts fluttering with his suave turn as an all-action special operations soldier in the hit K-drama Descendants Of The Sun.

During filming, the 30-year-old heart-throb also created lots of heart palpitations because he caused a number of no-good (NG) takes, revealed his co-star Song Hye Kyo.

The 34-year-old actress said: "The characters aren't very serious at times. So you'll see funny parts here and there. Joong Ki and I both laugh a lot. We had to stop filming sometimes because we were laughing too hard. I remember how bad I felt for the staff at the shoot." 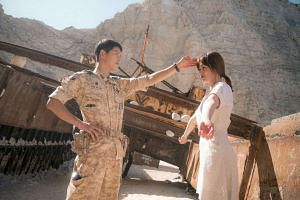 She was speaking at a press conference in Hong Kong on Tuesday, which also saw the attendance of Song Joong Ki. They were promoting the drama that will air on new Hong Kong channel Viu TV. In Singapore, the 16-episode series is available for free on K-drama streaming site viu.com  and the Viu app.

The romance thriller - starring Song Joong Ki as Captain Yoo Si Jin and Song Hye Kyo as the female doctor that he is in love with - has garnered top ratings across the region.

In Seoul, where episodes 11 and 12 aired last Wednesday and Thursday, Descendants has scored ratings above the 30 per cent share of the audience, surpassing global hit My Love From The Star's highest numbers in 2013.

In Hong Kong and Singapore, Descendants is the most-watched show on the Viu online service. Last month (March), about 60 per cent of Viu's viewers in Singapore and Hong Kong tuned in to watch Descendants.

The show mixes together a variety of genres, sometimes awkwardly within one episode, but Song Joong Ki seems to think that is its appeal. He said: "You can see different kinds of scenes in the drama, there's action, there's earthquakes. But we still consider it a romantic drama. There are many couples like me and Hye Kyo, as well as (the couple played by actors) Jin Goo and Kim Ji Won in the drama."

At the press conference, he oozed confidence and charm just like Captain Yoo, his first role after completing his two-year compulsory military stint last year.

"It feels very natural for me to be in a soldier's uniform since I just left the army not long ago. The uniform feels like my regular outfit," he said.

Not forgetting to compliment his beautiful co-star Song sitting next to him, he added: "Do I need to rate her look in the drama too?"

Descendants Of The Sun is available on viu.com  and the Viu app, which can be downloaded from the App Store and Google Play Store. New episodes are available eight hours after the telecasts in South Korea on Wednesday and Thursday.